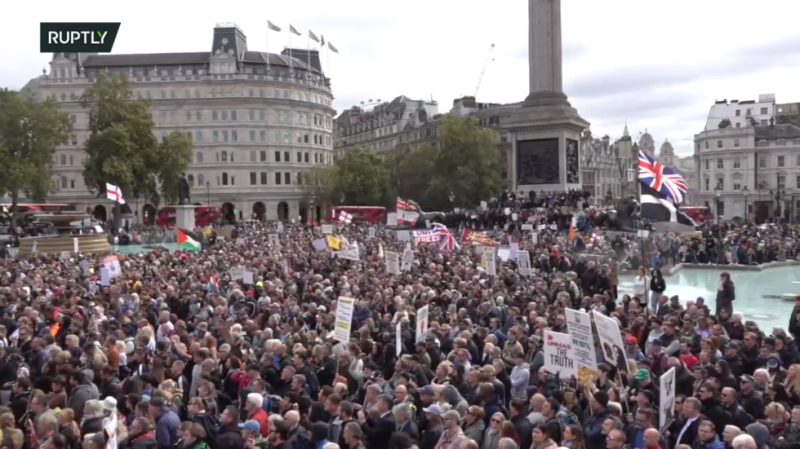 Several thousand protesters assembled at Trafalgar Square on Saturday, with some eyewitnesses claiming that attendance was even higher than the turnout at a similar event held last weekend.

Demonstrators held signs, waved British flags and cheered as speakers addressed the crowd. At one point the crowd could be heard chanting “freedom” as people whistled and clapped.

The protest, dubbed We Do Not Consent, received a warning from the Metropolitan Police, which said it would intervene if the protesters don’t abide by social distancing guidelines.

Footage from RT’s video agency, Ruptly, shows the square packed with people, most of them without masks.

Toby Young, General Secretary of the Free Speech Union, expressed hope that law enforcement would allow the group to protest “as they did with [Extinction Rebellion] and BLM,” he tweeted.

Last Saturday more than 30 people were arrested after police engaged in a shoving match with demonstrators.

The UK government has faced considerable criticism for imposing strict new rules in September purportedly put in place to stop the spread of Covid-19. People are now barred from meeting in groups larger than six, and citizens face large fines if they refuse to self-quarantine when ordered to do so by public health officials. Restaurants and pubs were recently instructed to stop serving customers at 10pm. The country has seen a surge in new coronavirus cases, but the uptick has not led to a noticeable rise in deaths.