Home / WORLD / Wayne Dupree: Joe Biden’s embrace of Cardi B is shameless & immoral, but it shows that we on the Right have lost the culture war

Wayne Dupree: Joe Biden’s embrace of Cardi B is shameless & immoral, but it shows that we on the Right have lost the culture war 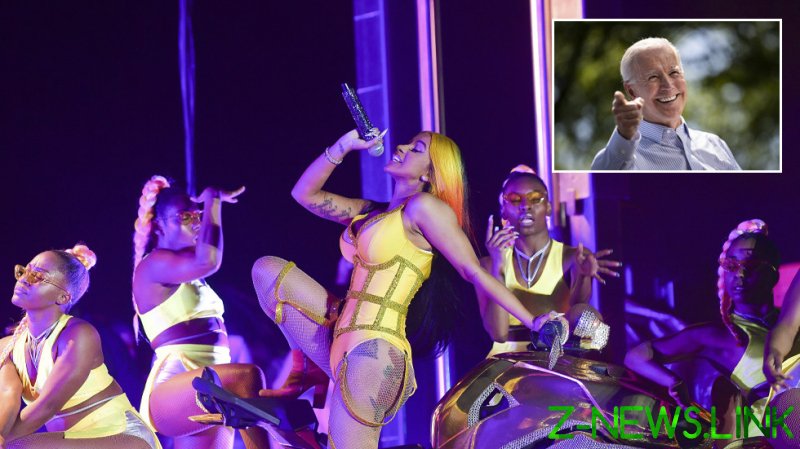 Folks, the culture war is over, and we on the right side of things have lost. Nothing is too low, too vile, too disgusting for the Left to embrace and for most Americans to go along with.

Yes, there are Americans who hate this stuff, but no one cares. I don’t even want to bring up Cardi B’s video of her performing her latest hit, WAP, with my 17-year-old daughters for fear they’ll YouTube it to see what I’m talking about.

I haven’t listened to it or watched it, but to my shame, I did listen to NWA in the ’90s, and they were just as bad. Honestly, I’d sometimes like to leave society behind and cloister up somewhere on an island with like-minded people.

Former vice-president and 2020 Democratic Party presidential nominee Joe Biden has embraced Cardi B, and many of us have been left scratching our heads. The Democrats are so accustomed to exploiting the black community they no longer even recognize when they are doing it.

Because the flashy Cardi B is popular in the black community, Biden is pandering to her for her support. It is more than disappointing that so many of our citizens only see the flash and fail to see the underlying moral corruption being advocated by Biden and co.

Not only Biden, but the Democratic Party and progressives have embraced this vile woman. Not a real surprise, for they have also embraced the BLM thugs, the Antifa anarchists, and anyone who hates America.

What have we on the Right done to counter the Left’s shift? Not a damn thing, except complain online and cry about Dems using culture to win over minds. The playground is fair, but one side won’t play or engage, and America suffers for it.

I do believe Biden’s advisers should be, at a minimum, fired for allowing Biden to demean himself in this way; but they won’t be. On the other hand, considering Biden does not think his long record of touchy conduct with women was inappropriate, perhaps he believes Cardi B is representative of today’s women.

It is mystifying that many respectable women (the overwhelming majority of whom reject out of hand what Cardi B is selling) will vote for this senile old fool who in truth probably doesn’t have a clue who the rap star is or what she is selling.

I have $100 for the first journalist that asks Biden on camera what “WAP” stands for (here’s a free clue, Joe, it’s not Wireless Application Protocol). WAP is a Cardi B song that she dances to, sexually explicit like always, and it also has nothing to do with Hail Mary’s prayers. Joe, of course, won’t know and will be horrified when told.

Does he know Cardi B and her sidekick Megan Thee Stallion sing the P-word 18 times, the N-word three or four, or that their lyrics celebrate painful, rough sex, and include such memorable lines as, “There’s some whores in the house,” “I don’t cook, I don’t clean, but here is how I got my ring,” “Pay my tuition just to kiss me,” “He got some money, then that’s where I am headed,” and “You can’t hurt my feelings, but I like pain.”?

There are more explicit lines, but I frankly can’t bring myself to type them.

I’ll throw in another $100 if the journalist asks Joe about what WAP means in front of his wife. Let’s see what happens then. And ask why he sat for an interview with someone like that without criticizing her in any way.

Why am I going after Joe? Because he and his people ran to get that type of endorsement, even though the rapper probably won’t even vote.

Let’s bring a little more honesty to this article. In a more normal world, the likes of Cardi B, whose real name is Belcalis Almanzar and who was a stripper before she found musical fame, would be cleaning toilets at the Days Inn. Instead, propelled by sales of her music (can it be called that?) to white suburban teens who think they are original gangstas, she has become extremely wealthy.

To the parents who allow their teen daughters to buy and listen to this sort of thing, how about going all-in and make them dress that way, too? Live the thug life. Maybe even turn a few tricks to add to the college fund. Where’s the harm? Norplant them, and no worries. Don’t be hypocrites and draw the line anywhere in between.

Conservatives, if there are any out there anymore, really need to start recognizing that this kind of material is bait. The whole point is to provoke a response, and yes, I’m aware that I’m playing into that to some extent, but it needs to be pointed out so people don’t keep falling for it.

It’s not for me to force Biden to condemn Cardi B or any of the musical artists or Hollywood actors for the direction they’ve taken to push culture out to the masses. But to embrace her and her kind is not helping this country, nor providing good role models to the young.

Thousands of black parents understand the need for self-worth and respect and aren’t fooled by the pandering of people like Biden towards foul-mouthed pop stars. Those parents are more interested in charter-school expansions for their kids; they desire a more secure neighborhood, even if that calls for a bigger police presence.

Republicans don’t have it in them to work with culture because it means nothing to them. I call out Democrats a lot, but I am not a Republican. I am a registered independent conservative American, and while I probably wouldn’t vote for a Democrat ever again, I do believe Republicans would have a chance to turn the tide if they only cared. I don’t see that they do, however, which means the status quo will remain the status quo, and shameless Joe will be left to get down with the rappers.