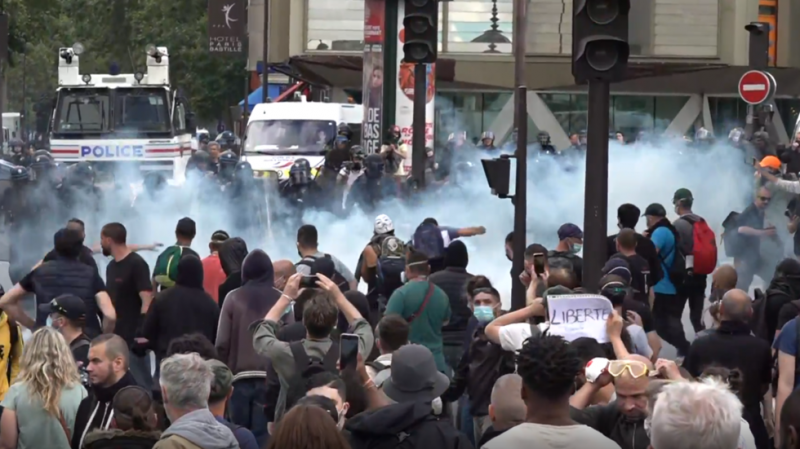 Tensions have been running high on the streets of Paris on Saturday, as scores of people rallied against the government’s plan to demand a special Covid-19 health certificate to let people engage in everyday activities.

At some points, the situation apparently spiraled out of control as the law enforcement officers were seen using water cannons and tear gas against the angry crowds pelting the police with what appears to be stones and bottles.

A video published on the social media also showed what appears to be an explosion of a small incendiary device on one of the streets, where the police engaged the protesters.

Another video showed a brief but intense scuffle between the police and the protesters that apparently prompted one of the officers to try his boxing skills in a standoff with the crowd. The officers were actively using tear gas cylinders and pepper spray to disperse the crowds and drive them away.

A group of retreating police officers also saw some of their colleagues falling over a barricade made of burning dust bins. The incident ended up with one officer briefly catching fire, with his colleagues rushing to douse the flames.

Le Parisien reported that at least three police officers were injured in Saturday’s clashes. It is unclear how many protesters were injured and detained during the demonstrations. Footage that surfaced on the social media showed police putting handcuffs on several people lying on the ground.

Paris was not the only protest venue on Saturday as similar events were held in some 150 cities across France, according to the media reports. Most demonstrations were peaceful.

The massive protests were sparked by the decision by President Emmanuel Macron’s government to further tighten Covid-19 regulations. Starting from August 9, French citizens would need a special health pass to get into cafes and even to use certain means of public transport. The ‘green pass’ document proves that a person is either fully vaccinated, has recovered from Covid-19 or has recently been tested negative for the disease.