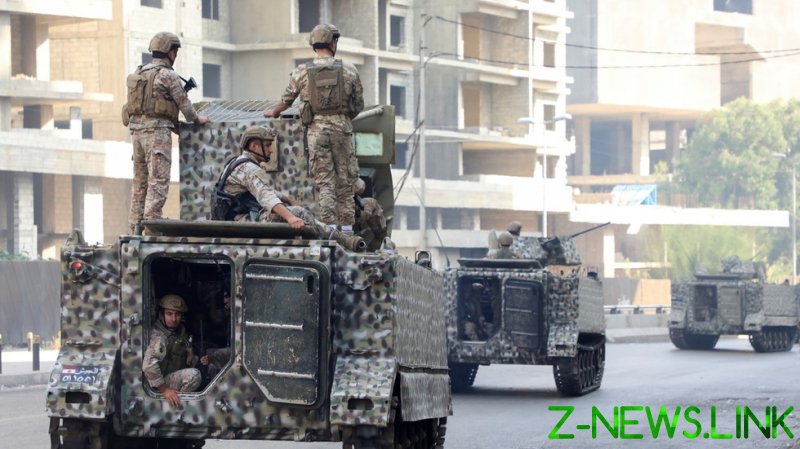 Beirut resembled a warzone on Thursday as the army deployed armored vehicles to a divided area of the city where deadly skirmishes erupted following an attack on a protest. The army declared that the troops would fire at any armed individuals on the capital’s streets.

The Lebanese army deployed a range of armored vehicles, including tanks and trucks with mounted machine guns. Sources on the ground suggest the troops have moved toward a building from which militants are allegedly based.

Videos show armed men firing rocket-propelled grenades, others responding with machine-gun fire. Many of the militants are dressed in body armor and have sought to protect their identities by wearing balaclavas.

In other footage shared online, Lebanese troops can be seen patrolling the devastated area of the city, pointing their guns up at apartment blocks as they hunt for those involved in the unrest.

Prime Minister Najib Mikati called for calm. The leader attended the defense ministry to oversee the response to the violent clashes.

In a statement, the Lebanese army said that the gunfire started as protesters, demonstrating against Tarek Bitar, the lead investigator of the Beirut port probe, passed through a traffic circle located in an area dividing Christian and Shiite Muslim neighborhoods.

Reports suggest the shooting came from the Christian neighborhood of Ain el-Remmaneh and spiraled with shots being fired in both directions.

Hezbollah’s al-Manar TV cited that two had been “martyred” and several wounded had been taken to a hospital in the Shiite southern suburbs. Lebanese Interior Minister Bassam Mawlawi said five people had died.

The protesters have been calling for the removal of Judge Bitar from the port explosion probe, accusing him of prejudice after he requested some of the country’s most senior politicians appear before the court.

On Tuesday, Bitar issued an arrest warrant for ex-Finance Minister Ali Hassan Khalil shortly before Khalil and former Public Works Minister Ghazi Zeiter filed a complaint asking for Bitar’s removal from the case. Both Zeiter and Khalil are close or allied to Hezbollah.