WATCH: Tens of thousands march against President Bolsonaro’s response to Covid in Brazil 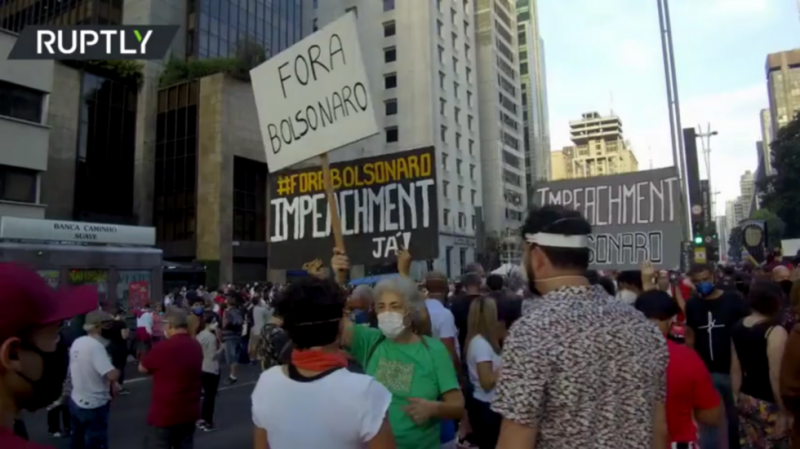 Massive but mostly peaceful demonstrations were held in numerous cities and towns across the Latin American country on Saturday. ‘Fora Bolsonaro’ (Bolsonaro Out) was one of the main slogans among protesters, who demanded the impeachment of President Jair Bolsonaro over the response to the Covid-19 pandemic.

People flooded the streets of Sao Paulo, Brazil’s largest city and one of the world’s most populous. Most wore masks, carrying signs with slogans calling for vaccination against the deadly virus, as seen in footage from RT’s Ruptly video agency.

Effigies of the president were seen at the protests, and some of them were reportedly burned by the demonstrators. In Sao Paulo, a huge inflatable doll of the president depicted him as a vampire.

Some angry demonstrators accused the government of genocide, as the authorities have not implemented strict Covid-19 measures. “We have had enough, we can’t take this genocide. Killing Brazilian people either by the virus or by hunger, we will not wait passively until 2022, we came to say we want impeachment of Jair Bolsonaro now,” a politician from the Socialism and Liberty Party, Guilherme Boulos, said.

Thousands also rallied in other major cities, including the capital, Brasilia and Rio de Janeiro. No confrontations with law enforcement were reported there. However, in the city of Recife in the north-east, police reportedly used tear gas and rubber bullets. In the southern state of Santa Catarina, protesters blocked a major highway.

Around 16.5 million people have been infected with the virus in Brazil, and more than 460,000 have died – the second-highest death toll in the world after the US. Bolsonaro has been accused by his critics of playing down the virus and not providing timely mass vaccination, resulting in a Senate inquiry into the government’s handling of the crisis.