Home / WORLD / WATCH: RT captures arrival of US Air Force One in Geneva LIVE as Biden lands in Switzerland ahead of meeting with Putin 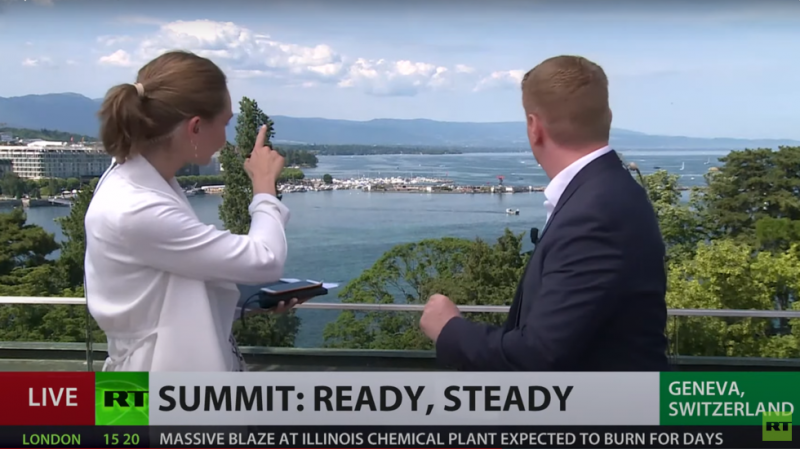 RT correspondents Saskia Taylor and Peter Oliver were just reporting live from Geneva, where preparations for the summit between the two leaders were in full swing, when they noticed what appeared to be US Air Force One descending ahead of its landing at Cointrin Airport.

“That does look like a 747,” Oliver said as the crew’s camera zoomed in on the aircraft, which closely resembled the plane used by the US president. Air Force One is in fact a Boeing VC-25 – a military version of the Boeing 747 airliner specially modified to suit the presidential needs and operated by the US Air Force.

“You always know when a US president is in town. It is a big symbol of his arrival, the presidential plane,” Oliver continued. He also said, citing his sources, that Biden’s arrival caused “absolute carnage in Brussels” on Sunday, with snipers deployed to the roofs and traffic shut down to provide security for the US leader.

Biden arrived in Geneva on Tuesday, a day ahead of his much-anticipated meeting with Putin, which will be the first since he took office. Ruptly video agency also published footage showing Biden leaving the plane and greeting Swiss officials led by the President Guy Parmelin.

The US president then went straight to a heavily guarded hotel for talks with Parmelin, Reuters reported. Earlier on Tuesday, the agenda of the meeting between Biden and Putin was revealed.

The two leaders are expected to discuss a broad range of topics, including the Covid-19 pandemic, the situation in eastern Ukraine, and the fight against cybercrime, as well as strategic stability.

Putin will travel to Geneva on Wednesday, the Kremlin said earlier.