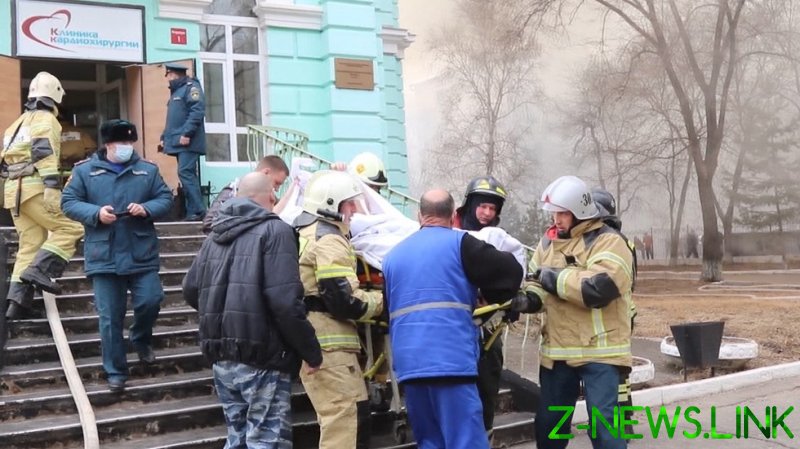 The procedure was performed on Friday in the city of Blagoveshchensk in Russia’s Far East. An otherwise fairly routine coronary artery bypass surgery became much more dramatic after a fire broke out at the hospital. The treatment was already past the point of no return and had to be completed before the patient and the team could evacuate.

On Sunday, one of the doctors involved published several short videos filmed during the extreme surgery, which offer a glimpse at how it actually happened. Georgy Kondratov had a few spare seconds to shoot the clips, since his job was to operate the cardiopulmonary bypass machine. The crucial piece of equipment keeps blood flowing and saturated with oxygen while other medics perform the necessary repairs on the heart.

The fire caused a power outage in the building, and the gear signaled the disruption with loud beeps, one of the videos showed. A backup power supply kicked in while necessary oxygen was delivered directly from canisters by a fellow anesthesiologist, Kondratov said with a few grateful words.

By the time the patient’s heart and lungs were working again and doctors were preparing to complete the surgery, Kondratov’s hour-long duty was done. As such, he could walk to a window and film firefighters using a hose to douse the still-burning hospital. The doctor acknowledged that the surgery was “adrenalin-driven” – as evidenced by him cursing a bit in the footage – but there was no panic whatsoever in the team.

The procedure was successful, according to the hospital. The male patient remains in a serious but stable condition at another medical facility in Blagoveshchensk, which accepted those who were forced out by the unfortunate disaster.

The fire was reportedly caused by faulty electric wiring and prompted the evacuation of 120 patients and personnel – though some obviously made it out sooner than others.