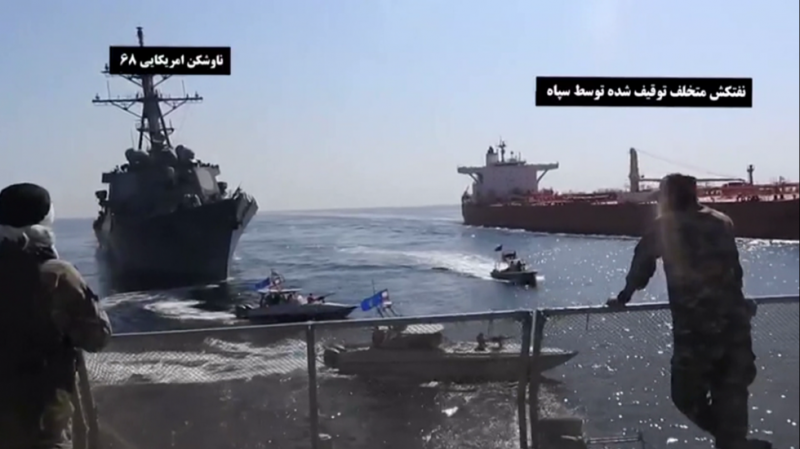 On Wednesday, Iranian state media reported that units of the Islamic Revolutionary Guards Corps (IRGC) were forced to respond to an incident in the Gulf of Oman in which American forces attempted to seize the Vietnamese-flagged oil tanker Sothys. The government quickly confirmed the reports, noting that the events had taken place in late October.

Footage released shortly after shows the moment Iranian forces reached the tanker. A helicopter is used to transport IRGC troops to the vessel, while Iran’s famed military speedboats can be seen attempting to block the path of US warships.

On Wednesday, however, the US rejected Iran’s claims as “totally false and untrue.” American officials claim Iran seized the Vietnamese tanker last month and its warships were simply observing the situation. “The only seizing that was done was by Iran,” Pentagon Spokesman John Kirby told reporters.

Despite being dwarfed by the US vessels, the Iranian forces appear to successfully block the path of America’s warships as the tanker sails away. In multiple shots, IRGC soldiers can be seen training their weaponry at the American vessels.

Despite claiming a successful operation, the Iranian government said on Wednesday that the US had transferred oil from the tanker onto another vessel. The location of that other vessel was unknown, it said.

Iran’s oil exports were banned by the US as part of the crippling series of sanctions imposed on Tehran following former President Donald Trump’s unilateral decision to abandon the 2015 nuclear pact, which had put constraints on Iran’s atomic ambitions. Any country that purchases Iranian oil will also face the threat of sanctions.

Iran has said it will continue exporting oil – a vital source of revenue for the government – regardless of the sanctions. Wednesday’s events are not the first time the US has intercepted vessels carrying Iranian oil.