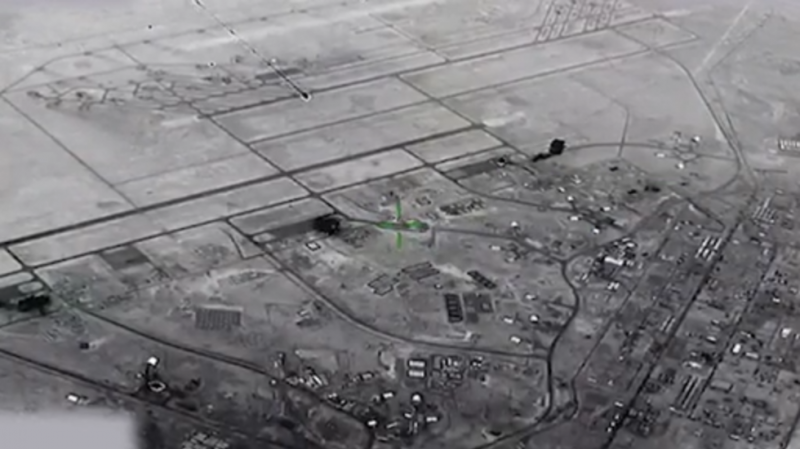 US Central Command released the declassified footage to CBS for a ‘60 Minutes’ segment over the weekend, in which six Qiam 1 missiles are seen raining down on the Ayn al-Asad airbase, which houses US troops in Iraq’s western Anbar Province.

Filmed in grainy infrared, the brief annotated video shows incoming missiles as they slam into aircraft maintenance hangars and other base facilities, detonating and sending black columns of smoke into the sky.

The footage was captured on January 8, 2020 by an American drone buzzing over the base, some five days after Soleimani was killed in a US air raid near the Baghdad airport, ordered by then-president Donald Trump.

In total, at least 11 Qaim missiles were fired at Ayn al-Asad in the Iranian counterattack, according to the defense secretary at the time, Mark Esper – though CBS’s reporting put the figure at 16, stating that several projectiles had misfired. While no US troops were killed in the strikes, 110 servicemembers were ultimately diagnosed with traumatic brain injuries due to their close proximity to the blasts.

While US military officials have since praised American intelligence for alerting them to an impending attack and allowing an evacuation of aircraft and other assets beforehand, Iraq’s then-prime minister Adel Abdul Mahdi noted that Iran itself sent advance warning to Baghdad, which was relayed to Washington. The Iranian leadership has also argued the strikes were intended as a show of force, rather than to inflict casualties, in the wake of the Soleimani assassination.

Authorities in Iraqi Kurdistan noted that at least two short-range missiles targeted Erbil International Airport, which also houses US troops, in the January 8 strikes. The same base in Erbil was hit in a rocket attack more recently, prompting retaliatory air strikes from Washington. One of the Iraqi militia groups blamed for the attack, Kataib Hezbollah, has denied any involvement in the incident, however.