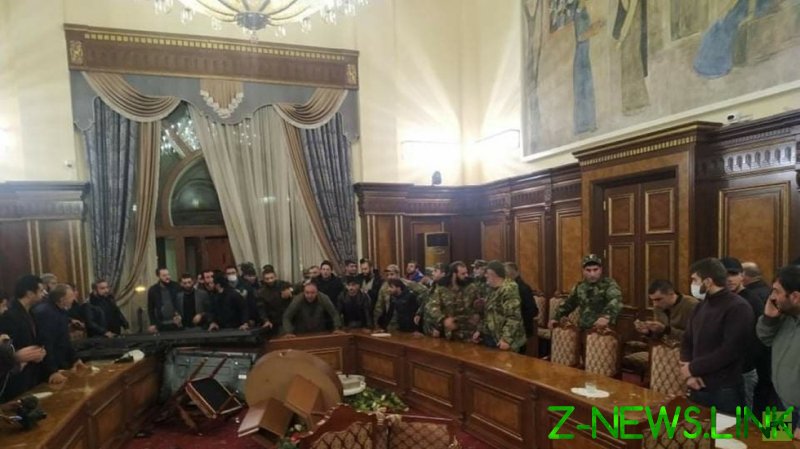 Gunshots could be heard in the streets of Yerevan as the angry protesters stormed the government building, looking for Prime Minister Nikol Pashinyan in the early hours of Tuesday, after he announced the “painful” agreement to give up land to Azerbaijan in exchange for the end to bloodshed.

Pashinyan’s whereabouts are currently unknown. Armenia’s parliament is also reportedly under control of the protesters.

Speaker of the Armenian parliament, Ararat Mirzoyan, was reportedly beaten up by protesters and is in serious condition.

The armistice that went into effect at midnight Tuesday local time seeks to end the six weeks of fighting over the contested region, which have seen major Azerbaijani advances into the territory held by ethnic Armenians since 1994.

In a Facebook statement announcing the deal, Pashinyan called the terms “not a victory, but not a defeat.”

Under the terms of the agreement, Azerbaijan gets to keep the territory it has taken in the most recent fighting, with Armenia ceding additional territory over the next month, leaving Russian peacekeepers guarding a road connecting the remnant of Nagorno-Karabakh with Armenia proper.

In a Facebook Live broadcast from an unknown location, Pashinyan said that all participants in the Yerevan “pogrom” will be severely punished.

The apparent revolt against Pashinyan mirrors the way the former media mogul came to power, using the street revolt to force the resignation of then-PM Serzh Sargsyan and compelling the parliament to vote him in as prime minister in May 2018.

Nagorno-Karabakh is an ethnic Armenian enclave that seceded from Azerbaijan once the Soviet Union began to collapse. Armenians made gains during the 1991-94 conflict, which was frozen until it erupted again at the end of September.

The situation was aggravated by the fact that Azerbaijan received active support from NATO member Turkey, while Armenia is a member of the Collective Security Treaty Organization, a military alliance with Russia.