WATCH crowds in Minneapolis & around US cheer Chauvin guilty verdict 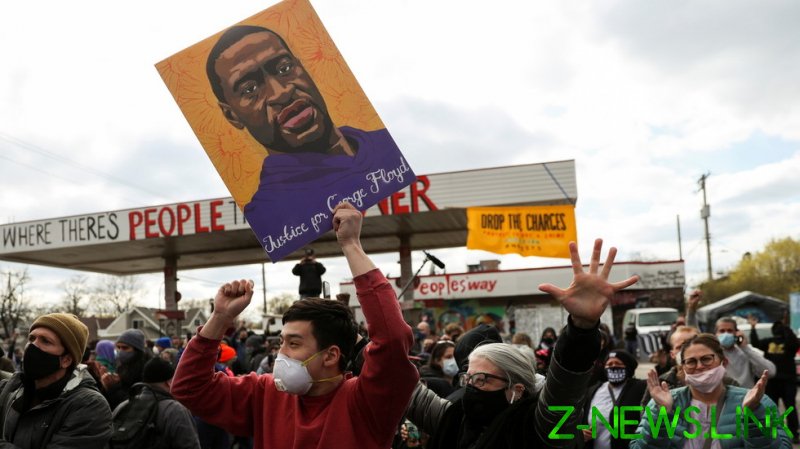 Jurors found the former Minneapolis officer guilty of second-degree unintentional murder, third-degree murder and second-degree manslaughter on Tuesday, charges that stemmed from the death of suspect George Floyd in custody last May.

Meeting for protests at the Hennepin County Courthouse throughout the tense weeks-long trial, activists were jubilant upon Chauvin’s guilty verdict, with the crowd heard chanting “All three counts!” in footage from the scene.

Demonstrators and supporters of Floyd also gathered near Cup Foods, where the 46-year-old African American man was killed after Chauvin pinned him to the ground with a knee to his neck for more than nine minutes. He was suspected of using a counterfeit $20 bill.

Following widespread fears over potential rioting and unrest in the event the officer was not found guilty, Chauvin’s conviction won unlikely support from Fox News’ Greg Gutfeld, who endorsed the verdict “even if he might not be guilty on all charges.”

“I want a verdict that keeps this country from going up in flames,” he said, prompting groans from Fox colleague Janine Pirro.

“We do not sacrifice individuals for the sake of how people feel,” Pirro shot back, as Gutfeld argued “I’m at least being honest. My neighborhood was looted. I don’t ever want to go through that again,” apparently referring to previous unrest over Floyd’s death, which kicked off weeks of heated protests in Minneapolis and dozens of American cities.

The crowds gathered at the courthouse and Cup Foods were mirrored by others in locales from New York City’s Upper West Side to Washington, DC’s Black Lives Matter Plaza, where people were seen reacting with cheers and tears to Tuesday’s verdict.

While Chauvin’s bail was revoked and he was immediately remanded into custody after being found guilty, scenes from his trial this week hint that his legal battle may not be finished. After the ex-cop’s defense attorney requested a mistrial over inflammatory comments about the case from Rep. Maxine Waters (D-California) last weekend, Judge Peter Cahill noted the congresswoman may have given the defense “something on appeal that may result in this whole trial being overturned.” So far it is unclear whether Chauvin will launch an appeal, though his lawyers are required to notify the court within 60 days if they intend to do so.