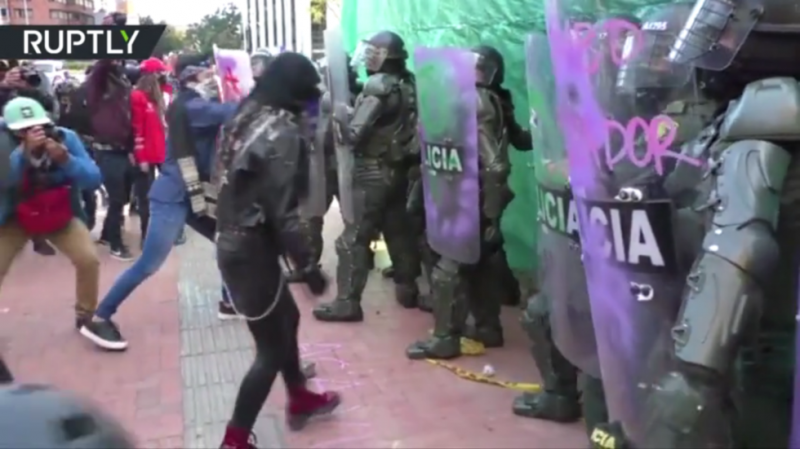 Hundreds of people flooded the streets of the Colombian capital to confront officers – who were equipped with riot shields and heavy-duty gear – early on Sunday. Some protesters chanted slogans and sprayed paint on the police shields, while others were filmed kicking officers away.

Police remained calm but launched a counteroffensive when the scuffle got more turbulent. Riot squads moved in to separate the crowds and made occasional arrests.

The brewing unrest was sparked after Javier Ordonez, a 46-year-old taxi driver and law student, was detained by Bogota police for an alleged violation of the lockdown rules, still in place to contain the Covid-19 virus. According to police, Ordonez defied the restrictions by drinking alcohol in the open with his friends.

Officers tackled him down to the ground and repeatedly tasered him as he begged, “please, no more.” Graphic footage of his arrest, filmed by a bystander, quickly went viral among Spanish-speaking social media users after Ordonez died in a hospital on Tuesday. Two officers were charged by authorities, and five others were suspended.

Warning! The video contains scenes that you may find disturbing.

Most of the unrest initially took place in Bogota, but later spilled over into the cities of Medellin, Cali and Manizales on Thursday. At least 13 people have died in cities across Colombia, and over 200 civilians and more than 190 police officers have been injured. Colombia began to relax some of its lockdown restrictions in Bogota and Medellin at the end of August, with businesses and public transport allowed to operate in a socially-distanced manner.

The Latin American country currently ranks sixth in the list of nations worst hit by the pandemic. Its Covid-19 tally stands at over 709,000 and the death toll is over 22,700.