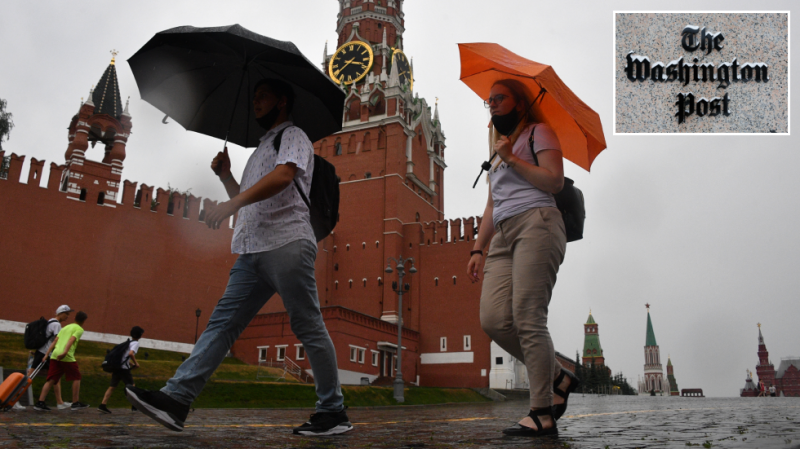 The piece, by George F. Will, argued that the efforts of “civilized nations to deter” Beijing and Moscow “are starting to add up.” The headline is striking, even by today’s low, post-Russiagate standards. It clearly implies that – to paraphrase Sergio Leone’s Western masterpiece ‘The Good, the Bad and the Ugly’ – there are two kinds of countries in this world: the civilized and the uncivilized.

That – whether penned by the author or an editor, and either way a senior staffer would have had to grant the green light – is a stunningly frank declaration of racist ideology in one of the United States’ most influential newspapers. The headline is so bizarre, in fact, it feels as if it emerged from a time machine – straight out of the Opium Wars era or the Scramble for Africa.

And make no mistake: racist it is. Because racism, please recall, is a fantasy and does not need ‘real race’: it can easily be deployed against groups that do not qualify as ‘races’, by any standards: ask Jews or, for that matter, Palestinians. So, no, the Russians or Chinese are not ‘races’. But yes, they can be targeted by racism – and, of course, they have been before in history.

Packaging your prejudice in a language of ‘civilization’ makes no difference to your racism, either. In fact, many up-to-date, even mildly educated racists won’t be honest enough to drone on openly about ‘race’. Instead, they’ll tell you about ‘cultural differences’, supposed widespread habits, and, of course, ‘civilization’.

In fact, that trick is really rather old as well: for instance, many Germans – in their former militarist and imperialist iterations – had a habit of despising their eastern neighbors as both, somehow ‘racially’ inferior as well as stuck at the lower end of a ‘Kulturgefälle’, a ‘cultural gradient’.

But this question is important beyond the shock value of a cheap provocation. As a symptom of a far larger problem, it the latest in a line of examples that demonstrate the worrying fact racism is now considered permissible among many conservatives as well as liberals in the West – especially in the US – when talking about Russia and China.

It’s easy to find further examples. There was James Clapper, America’s former top spy, no less, explaining to his countrymen that Russians are “almost genetically” prone to underhanded business. Clapper, of course, is a bureaucrat – and one with a solid reputation for, ironically, dishonesty and undermining the American constitution.

So, what about the West’s ‘intelligentsia’? Unfortunately, they’re not always that much better. Take Mark Galeotti, an influential British ‘Russia watcher’ and imaginative inventor of a whole Russian military ‘Gerasimov’ doctrine the Russians themselves had never heard of.

His response to being challenged over his loose talk of “dirty Russians” is to block his critics.

Or former TV personality Keith Olbermann, who first ranted about “Russian scum” and recently moped about “the stain of Russian heritage” he thinks he has detected in his descent. The German word for ‘scum’ is, of course, ‘Abschaum’ – and some very racist Germans about 80 years ago, who also worried a lot about their pedigrees, would have nodded approvingly, which is ironic.

Even Masha Gessen, occasionally caught up in totalitarianism-jargon hangover yet also sometimes insightful, could not resist tweeting a bizarre remark about Russia’s “culture” – there we go again – “of disregard for human life, when risky behavior is almost rational.” Not only disregard for human life, but also, mind you, an odd rationality where risk-taking becomes normal.

They are so different over there in Russia! Clearly not, that is, like the rest of us – on a planet where we’ve all been taking a truly insane risk with our biosphere ever since we were told about global warming. Or like Americans perhaps, who cannot curb the profits of gunmakers even if it means a more than occasional massacre.

And as one keen observer, the Russian-American writer Yasha Levine, has noted, the problem is not only that this sort of trash talk is now treated as perfectly acceptable. It is even worse, because there are so few who challenge it.

Apart from the serious moral and professional issues, the normalization of racism we see in the Washington Post’s headline is an important development, because it indicates the decay – or deliberate eroding – of two things humanity needs to survive: restraint and patience.

Between countries, things can always get tense. When they do, the result is political conflict, of short or long duration, hopefully without violence. To avoid the latter, reasonable people respond by practicing restraint. A perfect example for its enormous, vital value is the Cold War.

It was, of course, no ‘long peace’; rather – if you happened to live in, say, Vietnam, Indonesia, Angola, or Guatemala – the period turned your nation into a slaughterhouse. Yet at least the ‘superpowers’ managed not to blow up the world, even if they did come close – for instance, in 1962 and 1983.

The reason why we’re all still here, more or less, is that rest of restraint and patience that, for instance, kept Kennedy from following bad advice to bomb Cuba in 1962 and made Khrushchev accept an unfavorable compromise to end the crisis.

Not to speak of – undeservedly – less famous men who single-handedly saved the world by choosing not to over-react in terribly difficult situations when all-out nuclear war seemed not only a distinct possibility, but appeared to have started already.

If two – as it happens – Soviet officers, Vasily Arkhipov and Stanislav Petrov, had not kept a cool head in 1962 and 1983 respectively, rejecting established protocols and misunderstandings to avert disaster, the Cold War could very well have ended in World War Three.

If restraint and patience were essential to the survival of mankind during the Cold War, they probably have something to offer now, too, in a world that is – physically and politically – overheating.

That’s where we get back to the issue of racism. Because the habit of imagining your geopolitical opponent as essentially, or ‘civilizationally’, inferior, and yourself as equally essentially superior, makes you impatient and unrestrained.

The reasons for this dangerous effect are not hard to understand. First, patience presupposes the ability to wait. But how can you wait if you’ve deluded yourself into imagining that the other is categorically beneath you? Those you deem ‘uncivilized’, after all, may in your eyes be constitutionally incapable of ever living up to your lofty expectations.

Second, restraint supposes humility. You can only practice it if you keep in mind that you, too, may be at fault – not just your frustrating opponents. And, complimentarily, that your opponents may have good, or at least plausible, reasons for their actions and demands too. But how can you be humble if you think you are superior by the grace of ‘civilization’, or ‘values’, or ‘history’?

Third, once you are enough of an adult to master patience and restraint, the resolution or even simply management of conflicts requires communication. Yet how can you communicate in good faith with those you consider principally inferior to yourself?

Don’t the ‘savages’, in the racist’s flat mind, infamously understand only one language – that of force? And how can you expect them to take you seriously once they see how you see them?

That, in a nutshell, is why the facile and now fashionable habit of bashing Russians and Chinese in a racist register is not ‘merely’ an ethical and intellectual failure, but also acutely dangerous.

America certainly has no monopoly on prejudice and arrogance. But those failings are especially dangerous there, simply because it is – still – the single strongest power on the planet as well as the most belligerent one.

So, if the West is civilized, that means being patient, and being humble. It also means not entertaining these delusions of moral superiority. It’s bad for your brain, and for all of our safety.