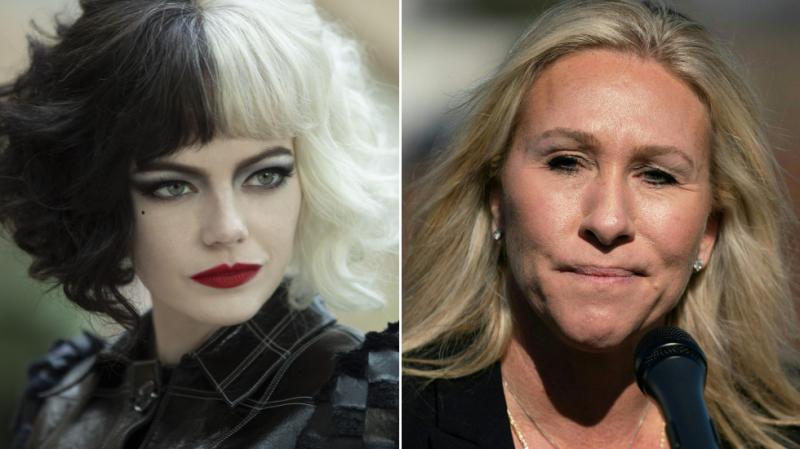 Unlike barrier-breaking provocative women of the past, today’s misbehaving females are easily accepted and adopted by large swaths of society, Rosenberg said. She compared Cruella’s fictitious antics to the behavior of Georgia Representative Marjorie Taylor Greene.

“Greene routinely violates the basic tenets of manners, much less the higher standard of conduct one might imagine public officials aspire to,” she wrote. “But much of Greene’s behavior is disturbing less because she challenges norms than because she embodies a troubling new set of them.”

The Republican lawmaker, who won her Congress seat last year, is among the political figures that the left in the US loves to hate. She is a stalwart supporter of Donald Trump, a vocal opponent of vaccination passports, and constantly clashes with Democratic Representative Alexandria Ocasio-Cortez. Or, according to critics, she is an insurrectionist conspiracy theorist, who diminishes the tragedy of the Holocaust and is harrassing a fellow legislator.

The comparison between Cruella and Greene drew some anger from both sides of the US political spectrum. Critics of the GOP politician accused the Washington Post of “trivializing” the US “slide into fascism” – ostensibly represented by Greene’s election to office.

Others simply declared that Greene is definitely the worst of the two.

The other side accused the newspaper of catering to its left-leaning readers with clickbait headlines and strained comparisons between an actual human and a Disney character.

While taking aim at Greene in the headline, Rosenberg’s column acknowledged that disrespect for norms is not restricted to women on the right. Her leftist examples were Rachel Dolezal, an activist who claimed to “self-identify as black,” and academic Jessica Krug, who faked Latina heritage.

“Greene is responding to the most degraded part of the Republican Party; Dolezal and Krug to a warped desire to claim the credibility that comes with identifying as non-white; ‘Cruella’ to the demands of Disney,” she wrote. “However different they may be, all three show how far the standards of female badness have fallen.”