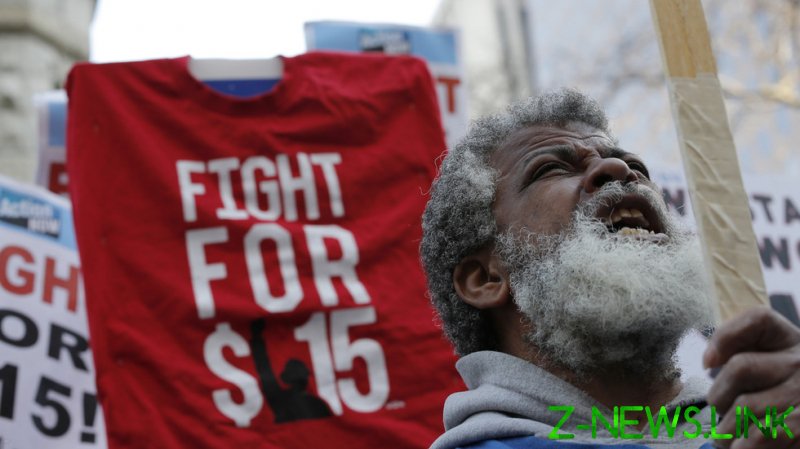 The Democrats’ proposed $15 national minimum wage increase cannot be included in President Biden’s $1.9 trillion Covid-19 stimulus bill, Senate Parliamentarian Elizabeth MacDonough ruled on Thursday. MacDonough, a Democrat who serves as a referee of sorts in the upper house, declared that the bill does not fall under budget rules, and as such cannot be passed with a simple majority, unlike the rest of the stimulus package.

Biden could, through Vice President Kamala Harris, overrule the parliamentarian. However, he has opted not to. “President Biden is disappointed in this outcome,” Press Secretary Jen Psaki told reporters afterwards, but added, “he respects the parliamentarian’s decision and the Senate’s process.”

The decision pleased Republicans, who argue that a raised minimum wage would kill jobs and penalize small businesses, and angered progressives, for whom a $15 minimum wage has been a long-time policy goal. When Biden ordered an airstrike on Iranian-backed forces in Syria later on Thursday evening, these progressives fumed at the Democratic president’s priorities.

“So, @JoeBiden bombs Syria and kills the minimum wage hike, confirming every fear progressives had,” pundit Cenk Uygur tweeted. “The establishment is back! And it absolutely sucks.”

Overruling the Senate parliamentarian is a rare move, but not unprecedented. Gerald Ford’s vice president, Nelson Rockefeller, overruled then-parliamentarian Floyd Riddick in 1975 to change the Senate’s filibuster rules. However, there is more precedence for bombing Syria. Both Barack Obama and Donald Trump launched strikes on Syria during their tenure in office, with Obama waging a full-on air campaign. Both presidents, and Biden, drew authority for the strikes from an Authorization for the Use of Military Force passed shortly after 9/11, a decade before Islamic State (IS, formerly ISIS) existed.

Aside from the minimum wage debate, Biden has angered progressives by capping stimulus checks at $1,400 instead of the $2,000 he promised on the campaign trail, and by reneging on his promise to push the Covid-19 relief act through Congress the moment he took office.

Progressive Senator Bernie Sanders, who ran for the White House promising a $15 minimum wage and now chairs the Senate Budget Committee, said that he is undeterred by the parliamentarian’s ruling, and will continue trying to force the wage hike into Biden’s Covid-19 bill.

“In the coming days, I will be working with my colleagues in the Senate to move forward with an amendment to take tax deductions away from large, profitable corporations that don’t pay workers at least $15 an hour and to provide small businesses with the incentives they need to raise wages,” he said in a statement.