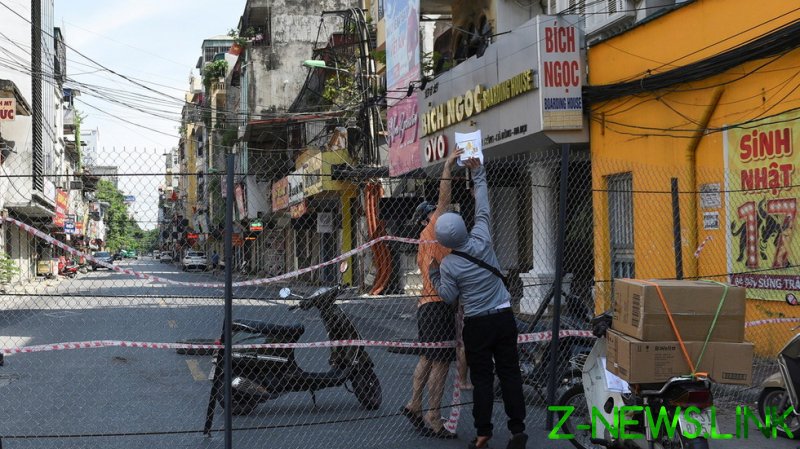 The accused, Le Van Tri, was charged with “spreading dangerous infectious diseases to people,” a crime which carries a penalty of five to 10 years in prison if it results in the death of at least one person under Vietnam’s criminal code.

Tri was found to have traveled to Ho Chi Minh City, Vietnam’s largest city, in March 2021 to work at a local wholesale market. Once his employer was forced to shut down the business due to Covid-19 restrictions, Tri and his brother-in-law returned to his native Ca Mau province in July 2021.

Back in Ca Mau, Tri filed his medical declaration and was told by officials at a “Covid-19 control checkpoint” to self-isolate at home. However, the man first went to apply for unemployment benefits and answered “dishonestly” when asked by the staffers if he had traveled outside the province, local media reported on Monday.

Tri was supposed to self-isolate for 21 days, but reportedly did not obey the order to the letter. Four days into his isolation, he tested positive for Covid-19, with the court finding him responsible for infecting several other people, among whom one has since died.

Tri later “confessed” to the offense at his trial.

Vietnam has imposed draconian Covid-19 restrictions in an effort to curb the spread of the virus, and has doled out harsh punishments for rule-breakers.

While Tri’s sentence appears to be one of the harshest penalties ever imposed for a breach of Covid-19 rules, it’s not the first one that’s carried real prison time. It was reported in July that a court in Vietnam’s northern province of Hai Duong jailed a man for 18 months after finding him guilty of illegally entering the country from Laos and violating the quarantine regulations.

In March, meanwhile, a Vietnam Airlines flight attendant was handed a two-year suspended sentence after flaunting quarantine regulations and subsequently infecting at least three other people. The state argued that the breach “put society in danger” and forced the government to spend an extra $194,192 on contact-tracing and testing for about 2,000 people.

On Monday, Vietnam reported 12,477 new infections, bringing the total number of Covid-19 cases since the start of the pandemic to 532,491. Some 13,385 or about 2.5% of the infected died from the virus, according to health authorities.