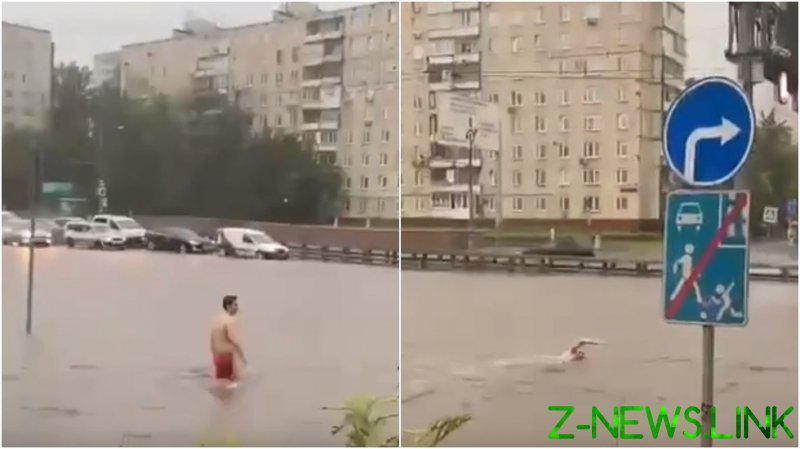 After a week of abnormal heat with temperatures of up to 36 degrees Celsius, the city of more than 15 million was showered on Monday by what the media described as “super rain.” Some parts of the Russian capital received roughly 70% of monthly precipitation in a matter of minutes, with the winds reaching speeds of 22 meters per second. The elements caused flooding and destruction, bringing down a construction crane, tearing off the roof of a building and starting several fires. Russia’s tallest building – the 540.1-meter-tall Ostankino Tower – was struck by lightning 22 times, while more than 60 flights were cancelled.

Many were rightfully terrified by the storm, but some Muscovites saw it as opportunity to have a bit fun.

A video filmed on the flooded Third Ring Road – a five-lane orbital motorway in the center of the capital – captured a guy in red shorts going for a swim in waist-deep waters. Clearly enjoying himself, the man showed off several swimming styles to the drivers stuck in their vehicles on a dry patch of the road.

He wasn’t the only one to come up with such an idea; another topless swimmer was filmed in the north east of the city. The guy looked more like a beached whale, as the water wasn’t that deep, but it still looked like he was having the time of his life.

A young man in another clip took to the water on a floating mattress – without even realizing that this might have ended in disaster. A bystander is heard warning the guy about an exposed wire nearby, prompting him to swiftly retreat from the puddle and not get electrocuted.

Despite the ‘super rain’ causing major havoc in Moscow, no fatalities or injuries were reported in the city.