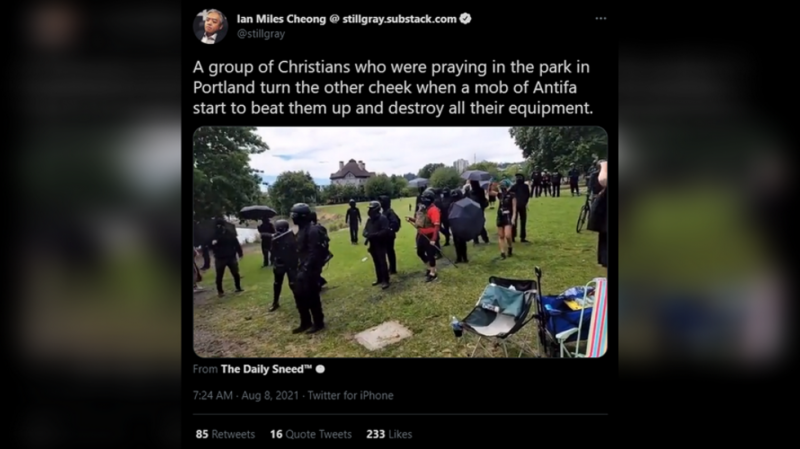 A “prayer event” held at a park in downtown Portland on Saturday was attacked by a group of left-wing activists who threw objects at attendees and assaulted them with pepper spray, the conservative Post Millennial reported.

Organizers announced the event last month, saying it would feature controversial Canadian preacher Artur Pawlowski. The Calgary pastor has made headlines for his vocal opposition and resistance to lockdown measures that have shuttered churches in the Canadian city.

Footage taken at the event shows black-clad Antifa members throwing projectiles at the event’s attendees, as some of the masked activists shouted “No hate speech.”

“They threw a bomb already. We’ve got kids here,” the narrator of the video says.

The activists eventually march up to the stage. One Antifa member takes the microphone, announcing: “All cops are bastards. In the name of Jesus, Amen.” The group of left-wingers then kick and destroy the sound equipment. One black-clad individual can be seen carrying a speaker to the nearby Willamette River, apparently so that they could toss it into the water.

A woman who attended the event later said on camera that the activists had thrown a “flash bomb into a group of kids,” some as young as four months old.

“We were about to have a worship event and Antifa just rolled in like an angry mob and started throwing flash bombs at everybody, macing everybody,” she said.

The incident reportedly did not result in any arrests.

While the violence elicited disgust and outrage among conservative pundits, many came to Antifa’s defense, insisting that the event was nefarious.

A Portland minister responded to reports about the attack by insisting that the gathering was a “far-right political rally organized by a failed MAGA congressional candidate from CA.”

One Twitter user said that she rode her bike to the part and saw “gun-toting Proud Boys running security for this prayer service.”

Footage appears to show members of the right-wing group sporting paintball guns near the event’s location, but it doesn’t appear that they were present when Antifa attacked the gathering. Another video, purportedly taken on the same day, shows the group skirmishing with Antifa in downtown Portland. A police officer can be seen observing the mini-battle, but doesn’t intervene.

Antifa has been linked to months of unrest in the city following the killing of George Floyd at the hands of the Minneapolis Police in May 2020.