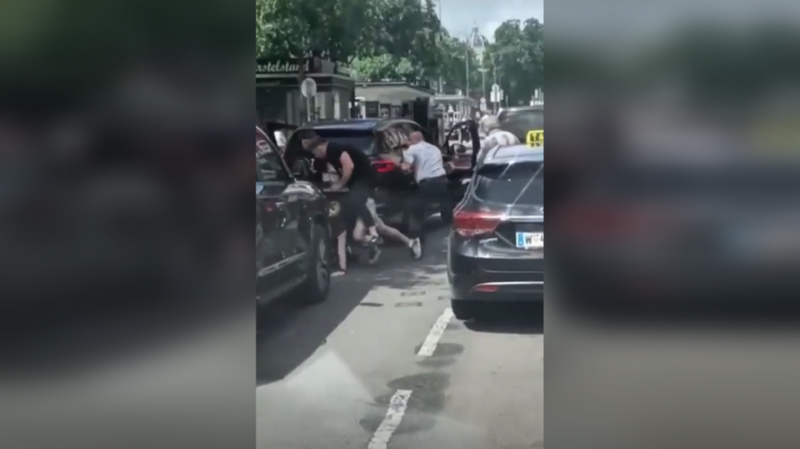 Two men were badly beaten outside a luxury hotel in Vienna by a group of apparent Ukrainian nationals. The incident unfolded in the heart of the Austrian capital earlier this week, with local police providing some details to the newspaper Heute on Saturday.

The brawl was apparently prompted by a parking lot dispute, when two luxury SUVs, a BMW X5, and a Toyota Land Cruiser stopped in places reserved for taxis outside of the hotel. At least one of the cars had a Ukrainian license plate, footage of the incident available online shows. Political motives for the assault are already ruled out, police spokesman Christopher Verhnjak told the newspaper.

The two taxi drivers waiting for clients outside of the hotel urged the drivers of the two cars to move from the restricted parking places, prompting an angry reaction from them and their passengers. Multiple young men exited the posh vehicles, cursing at the taxi drivers and spitting at their cabs. “The victims were subsequently attacked, as it can be seen in the video,” Verhnjak said.

One of the taxi drivers was promptly beaten unconscious during the brawl, footage from the scene shows. One of the men can be seen pulling the victim by his legs out of the way of the SUVs, which sped off after the assault.

The taxi drivers received various injuries in the brawl, with one of them, identified only as a 47-year-old man, ending up hospitalized with skull fractures. Another driver, a 48-year-old man, walked away from the incident with only slight injuries, according to the police spokesman.

The probe into the brawl is ongoing and no arrests have been made so far. “According to the preliminary probe, the suspicion lies with a Ukrainian citizen. Further investigations are ongoing,” Verhnjak stated.