Home / WORLD / VIDEO shows migrants fenced off UNDER A BRIDGE, laying in dirt at US-Mexico border, in purported footage posted by Project Veritas

VIDEO shows migrants fenced off UNDER A BRIDGE, laying in dirt at US-Mexico border, in purported footage posted by Project Veritas 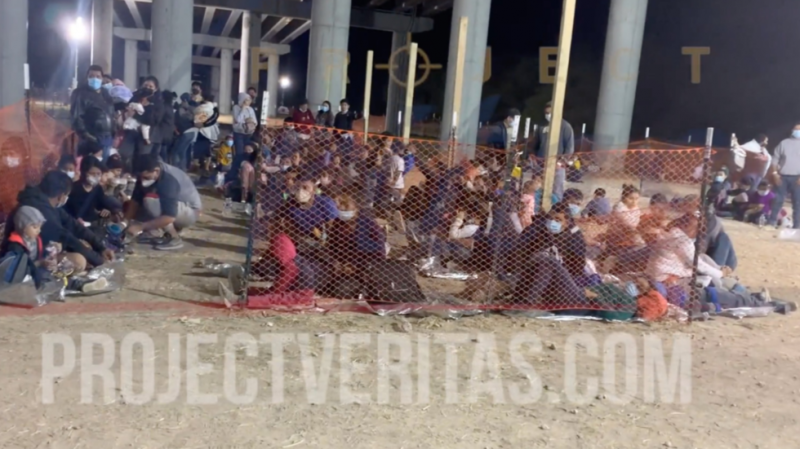 The clip, which was posted on social media on Thursday, shows dozens of migrants “of all ages” laying in the dirt with mylar blankets. James O’Keefe, founder of undercover-journalism outfit Project Veritas, said the leaked footage was shot under the Anzalduas International Bridge in Granjeno, Texas.

According to the insider, the area under the bridge is being used as a makeshift migrant-processing center by the US Customs and Border Patrol (CBP). The bridge connects the area around Mission, McAllen and Hidalgo, Texas, to Reynosa, Mexico.

The US has seen a surge in illegal migration to its southern border, including a record influx of unaccompanied children, since President Joe Biden took office in January. Biden immediately softened border policies, including allowing all unaccompanied minors to stay in the US.

The resulting flood of child migrants arriving at the border has left the administration unable to process the minors in a timely fashion. Children have reportedly been forced to sleep on the floor, go hungry and go days without seeing the sun.

Biden and members of his administration have tried to downplay the situation, avoiding use of the word “crisis,” and have blamed former president Donald Trump for causing the current conditions. When asked directly last month whether he believes there is a crisis at the border, Secretary of Homeland Security Alejandro Mayorkas said, “I think that the -– the answer is no. I think there is a challenge at the border that we are managing, and we have our resources dedicated to managing it.”

O’Keefe also posted still photos of the scene, including some of children, under the bridge in Granjeno. Conservatives pounced on the images as more evidence of Biden’s failed policies. Author Dinesh D’Souza said: “Joe Biden has long been touting his ‘humane’ immigration policy. Apparently, this is what he meant.”

Some observers on social media posted memes of US Representative Alexandria Ocasio-Cortez (D-New York), who blasted CBP and conditions at the border during Trump’s presidency but has remained largely silent on the current crisis. The congresswoman said on Wednesday that anyone using the word “surge” in reference to the current influx of migrants is invoking “white supremacy.”

“What madness is unfolding at the border under the guise of ‘humanitarian’ concerns?” journalist Libby Emmons asked.