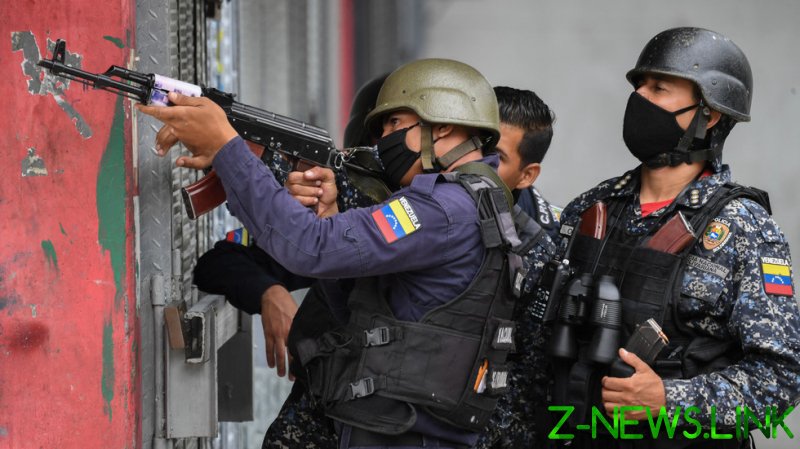 This week, parts of the Venezuelan capital turned into a battlefield as some 2,500 government troops engaged in a shooting war with the so-called ‘Koki’ gang, named after the nickname of its leader, Carlos Luis Revete, who has an estimated 250 people under his command and alliances with other gangs.

The powerful criminal organization is based in the northwestern Cota 905 neighborhood and has influence in areas of El Valle, El Cementerio, El Paraiso, La Vega and Santa Rosalia.

Some of the roads leading to the parts of the city where the fighting took place were closed by the authorities. The escalation of violence reportedly followed the gang’s Wednesday move to break an informal non-aggression pact with the government amid an effort to expand its criminal operations.

On Saturday, the government reported on its war with the gang and offered details about the operation to crush it, which they said was a success. Interior Minister Carmen Melendez, speaking alongside Vice President Delcy Rodriguez, said four officers from the national police and the national guard have been killed and 10 others injured. The criminals lost 22 fighters. There were also civilian casualties including 28 injured and several killed, the minister said without specifying the number of fatalities.

The authorities seized a large arsenal of weapons and munitions during the operation. Among the arms were tens of thousands of rounds of different calibers and several anti-tank weapons, including a Soviet-designed RPG-7, an AT4 launcher and a Carl Gustaf recoilless rifle, officials said. The Koki gang is known to have military-grade weapons at their disposal, and have occasionally bragged about their stockpile on social media. Venezuelan officials said the seized weapons were Colombian and American in origin.

Rodriguez pointed the finger at the government of Colombia, alleging its involvement in the surge in hostilities. It said three of the arrested gang members were identified as right-wing Colombian paramilitaries and confessed that they had received military training in the neighboring country.

“The armed groups of Cota 905 started acts of violence to sow fear among the people of Caracas, to undermine the rule of law and the institutional framework of our security organizations,” the vice president said, alleging that the gang acted after being encouraged by foreign forces.

She linked the violence in Caracas with recent visits to Columbia by top US officials. US Admiral Craig Faller, the commander of US Southern Command, went to the country in January and last month CIA Director William Burns did the same. Colombia is a close ally of the US government in South America. Neither government immediately responded to the allegations.

The US has been involved in a years-long effort to topple the Venezuelan socialist government through crippling economic sanctions and other measures. It doesn’t recognize President Nicolas Maduro as the legitimate leader, claiming that politician Juan Guaido has that authority. Guaido’s numerous attempts to install himself in Caracas over the years have failed so far.

Caracas routinely accuses Guaido, his allies in Venezuela and his foreign sponsors of trying to use violence to grab power. One of the highest-profile incidents of that nature happened in 2020, when a group of foreign mercenaries was captured after launching an incursion into Venezuela from Colombia by the sea.

Operation Gideon, which was allegedly aimed at arresting Maduro and handing him over to US custody for the reward money that Washington is offering for him, was organized by the US private military contractor Silvercorp USA. Guaido distanced himself from the flop, rejecting the claim by the company head that his ‘cabinet’ paid for it.