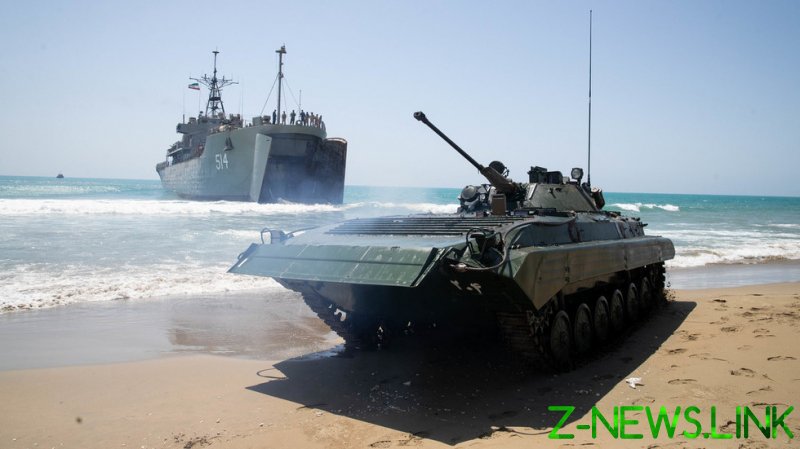 The exercise in the eastern part of the Gulf of Oman is aimed at improving Iran’s capabilities to repel “foreign threats and any possible invasion,” said Admiral Habibollah Sardari, who is in charge of the wargames.

The US had removed its drones from the area of the exercise after a warning from Tehran, Admiral Shahram Irani, the spokesman for the drills, told State TV. Before they were scared off, “we saw focused activities by American UAVs (unmanned aerial vehicles) to gather information” about the drills, Irani later told the Iranian Armed Forces website. The claim has not yet been confirmed by Washington.

The exercise, named Zolfaghar-99, will last for three days, covering an area of two million square kilometers. It will see Iran’s naval, air and ground forces, including submarines and drones, working hand in hand.

Iran’s state TV has already aired the first footage from the wargames, showing the firing of short-range surface-to-surface and surface-to-air missiles, with one projectile hitting a drone belonging to a simulated enemy. In another clip, Iranian airborne troops were filmed parachuting on ships and a submarine.

Tensions between Tehran and Washington have remained high since 2018, when the US unilaterally withdrew from the landmark international nuclear deal with Iran and reinstated sanctions against the country.

Since then, there have been several confrontations between Iran’s elite Revolutionary Guards and the US Navy in the Gulf, with the Americans saying that Iranian fast-attack boats had been harassing their vessels.

The two nations were on the brink of an all-out war after a US drone strike killed top Iranian General Qassem Soleimani on his trip to Iraqi capital Baghdad in January, with Tehran retaliating by launching missile strikes against American bases in the region.

Iran, which vigorously opposes the presence of the US Navy in the Gulf, had been threatening to completely block off the Strait of Hormuz in response to the sanctions.