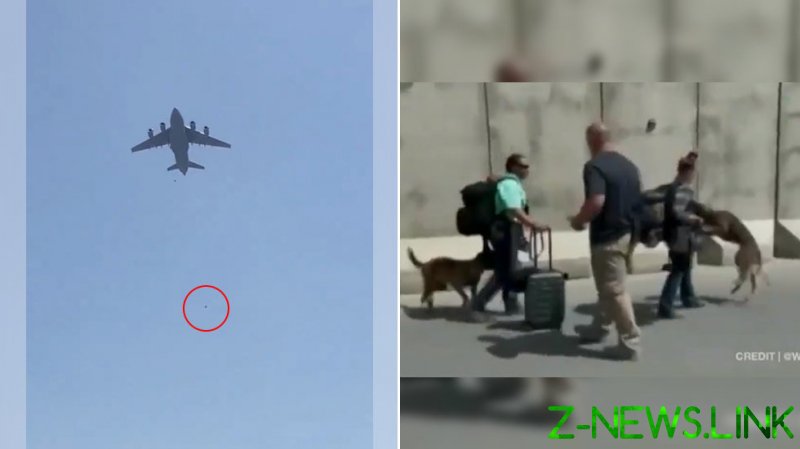 Videos and photos published on Monday – which showed dogs being walked to Kabul Airport, where they were evacuated along with US military personnel – angered many across the world, who viewed the apparent prioritization of animals over humans as an insult to the many Afghans attempting to flee the Taliban as the US pulls out of the country.

“There was room for the dogs, and all the luggage, but the people that allied themselves to the US had to latch onto the outside of a plane,” tweeted geopolitical analyst and RT contributor Maram Susli.

Others noted that “the optics” of dogs “being evacuated in an orderly fashion and Afghan citizens clinging to plane wheels and falling to their deaths” did not reflect well on the US, and that it served as the “perfect depiction of betrayal.”

Some social media users did defend the US evacuation of dogs over people, however, arguing that the animals were expensive, highly trained, and considered active military personnel.

“A dog weighs less than a human. Dogs are family. The plane cannot carry everyone, it has a weight limit. More planes are coming. Life’s rough, sorry. Much love,” one person wrote, while another claimed that sometimes dogs “are more important than anything else.”

“If you have NEVER been ‘bonded’ with a working dog then you’d NEVER understand!” the user declared.

Germany was also criticized on Monday for its own evacuation of Afghanistan.

Deutsche Welle reporter James Jackson called out the German military for shipping 22,500 litres of beer, wine, and champagne back home from Afghanistan in June, “meanwhile people were only given permission [to evacuate] if they worked directly for the Bundeswehr in the last two years” – leaving many subcontractors and translators at the mercy of the Taliban.