US reveals stance on nuclear-armed Ukraine 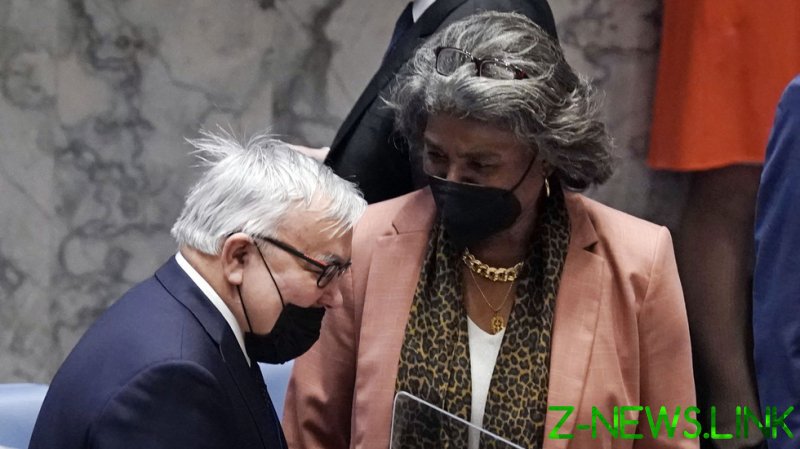 Neither Washington nor its allies harbor any intention of arming Ukraine with nuclear weapons, the US envoy to the UN has claimed at an emergency meeting of the Security Council, which was convened after Moscow recognized two breakaway republics in eastern Ukraine. The ambassador argued that Kiev is not seeking to arm itself with nukes either, despite a recent statement by the Ukrainian president that his country might give up its decades-old pledge to be a non-nuclear state.

“The US and our allies have no intention of supplying nuclear weapons to Ukraine, and Ukraine doesn’t want them,” Ambassador Linda Thomas-Greenfield said on Monday.

The prospect of a nuclear-armed Ukraine has sparked concerns in Moscow after President Volodymyr Zelensky appeared to raise such a possibility as recently as last week. Speaking at the Munich Security Conference on Saturday, Zelensky said he requested talks on the implementation of the 1994 Budapest Memorandum that saw Ukraine give up its atomic weapons in exchange for security guarantees. Arguing that Kiev has ended up with “neither weapons, nor security,” Zelensky said he would put the memorandum “under question” if his request to review the terms of the agreement is not met.

Speaking at a special meeting of Russia’s Security Council, which immediately preceded the recognition of the Donetsk and Lugansk republics in eastern Ukraine, Russia’s Defense Minister Sergey Shoigu said that Kiev was capable of designing tactical nuclear weapons, and would even enjoy a head start over Iran and North Korea.

In her speech at the UN, Thomas-Greenfield also accused Russian President Vladimir Putin of staking a claim to former territories of the Russian Empire, including to “all of Ukraine,” as well as Finland, Belarus, Georgia, Moldova, Kazakhstan, Kyrgyzstan, Tajikistan, Turkmenistan, Uzbekistan, three Baltic states, and “parts of Poland and Turkey.”

In his extended address to the nation on Monday, Putin lamented the decision of Russia’s Bolshevik government to sign the “humiliating” 1918 peace treaty with Germany, ceding huge swaths of territory, relinquishing all territorial claims in Finland, Estonia, Latvia, Lithuania, most of Belarus and Ukraine, among others. However, the Russian president did not call for a return to the Russian Empire of 100 years ago, saying: “Of course, the events of the past cannot be changed, but we must at least speak about them directly and honestly, without any reservations and without any political overtones.”