Home / WORLD / US responds to trucker blockade of border with Canada

US responds to trucker blockade of border with Canada 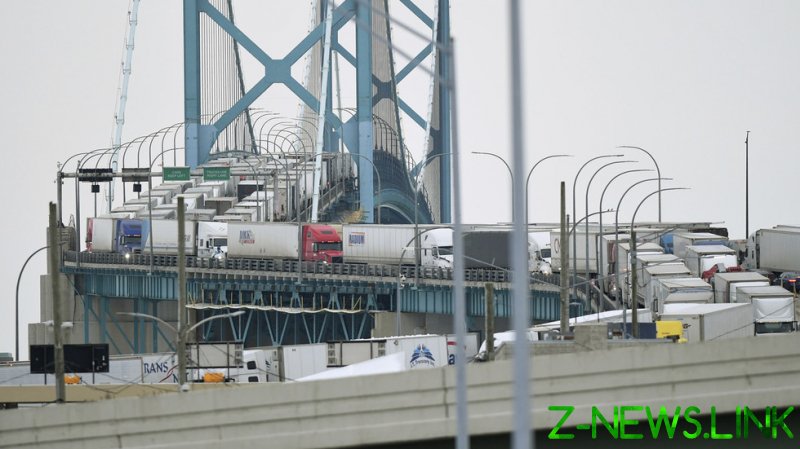 As the Ambassador Bridge between Windsor, Ontario and Detroit, Michigan remained closed for trucks as of Tuesday evening, White House press secretary Jen Psaki referred to the issue causing the closure as “sporadic congestion” and insisted it was not related to Covid-19 vaccine mandates.

“The protests going on across Canada, which have spread to a bridge, are leading to sporadic congestion and blockages,” Psaki told reporters at the briefing on Tuesday afternoon.

While “some” of the congestion is due to protests, “it is clear that these disruptions have broadened in scope beyond the vaccine requirement implementation,” she added.

Her statement came as thousands of Canadian truckers, who drove across the country in opposition to the vaccine mandate, continued to camp outside the parliament in Ottawa. Another group of truck drivers blocked an access road to the bridge between Michigan and Ontario on Monday evening.

On Tuesday afternoon, Windsor police said there was “a limited amount of access” to the bridge and urged commercial traffic to use an alternate route. The Michigan Department of Transportation was less circumspect, tweeting: “BRIDGE TO CANADA IN DETROIT IS CLOSED.”

Several truckers taking part in the blockade told the Canadian state broadcaster CBC that they were there to specifically oppose the vaccine mandates.

“I’m here for my kids, just to get it back to normal,” said trucker Sam Kovak. “Just end, give us back what we need to live again. Trudeau, Doug Ford, just listen to us,” he added, naming the prime minister of Canada and the premier of Ontario. “We’re sorry, but we have to make a stand.”

The Ambassador Bridge is Canada’s busiest border crossing and the busiest in North America, accounting for 27% of the trade between the US and its northern neighbor, according to the Post-Millennial. Some 20 million people live along the corridor from Windsor to Quebec City, the most densely populated part of Canada.