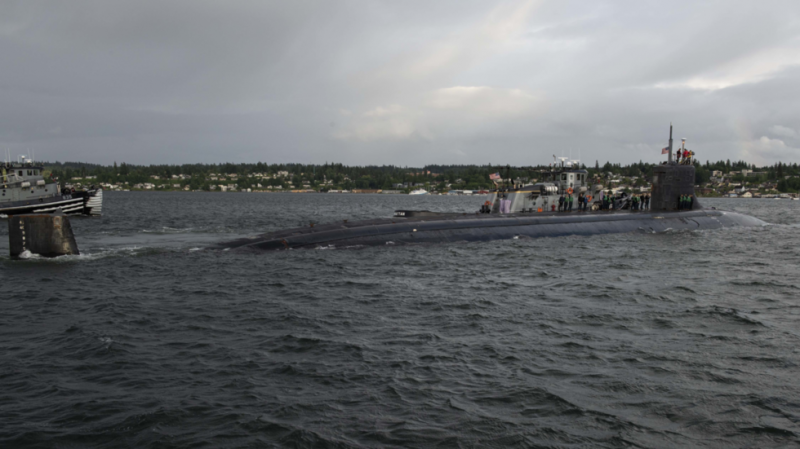 The USS Connecticut hit the “seamount” on October 2 while operating in international waters of the South China Sea, USNI News reported on Monday, citing a spokesperson for the US 7th Fleet. Results of the investigation have been submitted to Vice Admiral Karl Thomas, the 7th Fleet commander, who will determine whether “follow-on actions, including accountability, are appropriate.”

The Seawolf-class submarine’s nuclear reactor and propulsion system weren’t damaged by the collision. But damage to the forward section of the vessel, including ballast tanks, prompted the USS Connecticut to surface and make a week-long voyage to Guam for initial repairs, according to USNI, a news outlet of the US Naval Institute.

The Navy has yet to determine when the submarine will be sufficiently fixed to leave Guam for additional repairs, the report claims. Nearly a dozen crew members were reportedly injured in the incident.

China’s foreign ministry has repeatedly complained about Washington’s failure to provide detailed information on the collision. Just last week, Beijing demanded more than “vague statements,” saying, “This irresponsible approach and cover-up in the South China Sea has forced regional countries and the international community to question the truth of the incident.”

China’s foreign ministry spokesman Zhao Lijian said the US needed to explain why a nuclear submarine was sent to the area and to provide such details as what the vessel struck.

The incident marked the first known underwater collision involving a US submarine since 2005, when the USS San Francisco nuclear attack submarine plowed into an undersea mountain at full speed near Guam. One sailor was killed in that crash, and most of the other 136 crew members were wounded.

The Navy’s surface-level ships have had a bad run of crashes in the Asia-Pacific region in recent years, including an August 2017 collision between the USS John S. McCain destroyer and an oil tanker off the coast of Singapore that left 10 US sailors dead. About two months earlier, another destroyer, the USS Fitzgerald, struck a container ship while on a secret mission off the coast of Japan, killing seven crew members.

That same year, the USS Antietam guided-missile cruiser ran aground in Japan, spilling oil into Tokyo Bay, and another cruiser, the USS Lake Champlain, collided with a South Korean fishing vessel.