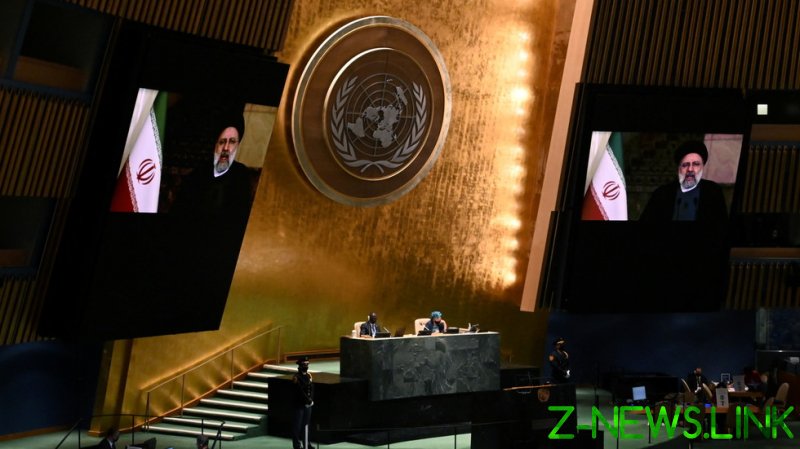 In a pre-recorded speech to the United Nations General Assembly on Tuesday, Raisi outlined major grievances with Washington while laying out a vision for his own country’s foreign policy, arguing that the world had rejected the US’ failed “hegemonic system.” To underscore the point, he cited two major events this year which he said symbolized that failure.

“This year, two scenes made history: One was on January 6, when the US Congress was attacked by the people, and two, when the people of Afghanistan were dropped from US planes,” Raisi said, referring to Afghans who fell to their deaths after desperately clinging onto the side of a departing US military plane during a hasty pull-out operation last month.

From the Capitol to Kabul, one clear message was sent to the world: The United States’ hegemonic system has no credibility, whether inside or outside the country.

Both “the idea of hegemony” and “the project of imposing westernized identity” onto the Middle East have “failed miserably,” Raisi went on, saying they had produced only “blood-spilling and instability and ultimately defeat.” And while the “oppressed people from Palestine and Syria to Yemen and Afghanistan” have had to bear the costs of those policies, so, too, has “the US taxpayer,” Raisi said.

Instead of seeking peaceful cooperation with the rest of the world, Washington has pursued a “way of war,” increasingly making use of sanctions to coerce other states to bend to its will, the president said. He noted that US sanctions on Iran began as early as 1951 – when the country attempted to nationalize its oil industry, “which in turn led to a military coup backed by the Americans and the British” – but continue to this day, including “inhumane medical sanctions” during the coronavirus pandemic.

“Sanctions, and especially sanctions on medicine at the time of the Covid-19 pandemic, are crimes against humanity,” Raisi said, calling for a formal ban on sanctions that obstruct humanitarian efforts, as they have for Iran’s pandemic response.

I… would like to condemn the continued illegal US sanctions, especially in the area of humanitarian items, and demand that this organized crime against humanity be recorded as a symbol… of the so-called American ‘human rights.’

In its dealings with the rest of the world, “Iran is keen to have large-scale political and economic cooperation and convergence,” Raisi said. However, with Washington, Tehran is only interested in dialogue that leads to the “lifting of all oppressive sanctions,” as was already agreed in the nuclear deal signed between Iran and world powers in 2015. The president said the US had not held up its end of the deal, calling on his American counterpart Joe Biden to return to the agreement after his predecessor unilaterally scrapped it in 2018.

We want nothing more than what is rightfully ours. We demand the implementation of international rules. All parties must stay true to the nuclear deal and the UN resolution in practice.

While the US and its allies have repeatedly accused the Islamic Republic of seeking nuclear weapons, Raisi insisted that both as a “strategic policy,” as well as on the basis of a religious decree from the country’s supreme leader, “the production and stockpiling of atomic weapons [is] forbidden” and “nukes have no place in our defense doctrine.”

“Fifteen reports released by the IAEA [International Atomic Energy Agency] have attested to the adherence of Iran to its commitments. However the United States has not yet discharged its obligations, which is lifting sanctions,” he said.

Finally, Raisi argued that attempts to create “Cold War-esque divisions” and to isolate “independent countries” would not foster regional stability, saying the US and all other “outsiders” must end their “aggressions” and “occupations” and allow local powers to address their own problems, including terrorism.

“The military presence of the United States in Syria and Iraq is the biggest hindrance of the establishment of democracy and the will of nations,” the president said, also citing US support for Saudi Arabia’s war in Yemen and Israel’s occupation of the Palestinians as dangerous and destabilizing policies.