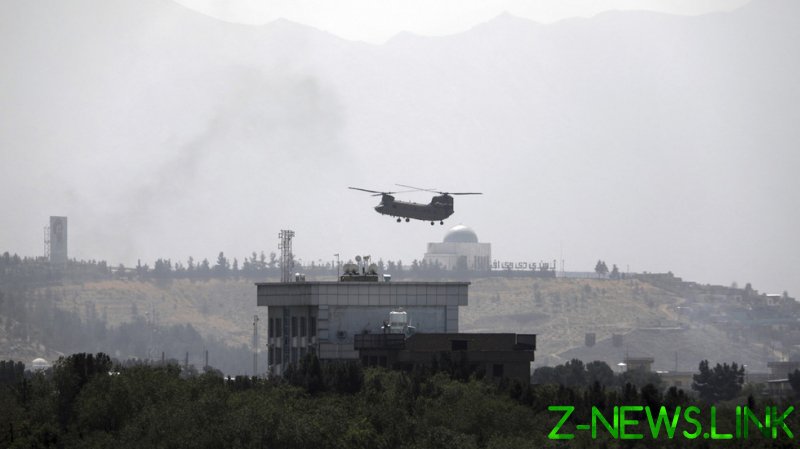 President Vladimir Putin’s special envoy on the troubled Central Asian nation, Zamir Kabulov, told the Echo of Moscow radio station on Sunday that Washington was trying to make the chaotic events look like a deliberate approach. “I think those behind these kinds of notions are trying to justify the failure of the Americans in Afghanistan and to make the case that this is a planned action,” he said. Instead, he argued, the belief had been that the US-trained Afghan army would be able to hold out against the Taliban for some time yet.

The Islamic militant group, which is listed as a banned terrorist organization in Russia, announced it had taken the capital on Sunday evening. Footage emerging from Kabul showed fighters taking over government buildings and sitting at the desk of the president, Ashraf Ghani, who announced he had fled hours earlier to neighboring Uzbekistan. Ghani said his decision was made in an effort to “avoid bloodshed.”

At the same time, thousands of Afghans fleeing the Taliban’s advance piled onto the concourse of Kabul airport, desperately searching for flights out of the country. However, passenger jets were barred from taking off, as military planes ran sorties to evacuate diplomatic staff and other officials from the country. Civilians who worked with coalition forces or foreign media outlets are thought to be at grave risk of reprisals.

Just over a week ago, US President Joe Biden batted away concerns that the country could be overrun by the Taliban, saying that the scenario was not inevitable. He argued that there would be no repeat of the fall of Saigon during the Vietnam war in 1975, saying “there’s going to be no circumstance where you see people being lifted off the roof of an embassy… of the United States from Afghanistan.”

However, on Sunday, American Air Force Chinook helicopters were seen touching down in the US Embassy compound in Kabul. Smoke was also seen rising from the buildings after an order was given to destroy all sensitive documents and electronic devices. Thousands of troops had been dispatched to help evacuate consular staff and the American ambassador was reported to have left the country on Sunday night as the Taliban closed in.

In a statement posted on Twitter, the Russian Embassy in the UK said that “the objective reality is that Washington’s comfortable position of US hegemony is receding into the past against the backdrop of the strengthening political positions of Russia and China.”

Moscow has sought to position itself as a deal-broker in Afghanistan. While the French, British and American consular missions have been shuttered, with staff relocating to the NATO-held airport, Russia’s embassy has remained in operation. On Monday, Moscow’s ambassador in Kabul said that the Afghan soldiers that usually guarded the premises had been replaced by Taliban fighters. According to Kabulov, who heads a department at the Russian Foreign Ministry, Moscow is ready to work with the militant group to deliver a transitional government.

Earlier this month, the diplomat said that the majority of the Taliban were now tired of fighting and, with US forces gone, ready for a peaceful settlement. “According to our estimates,” he said, “around two-thirds of this movement, including its top leadership, are committed to the idea of a political solution to the Afghan crisis.” Taliban representatives have visited Moscow in recent weeks for peace talks.