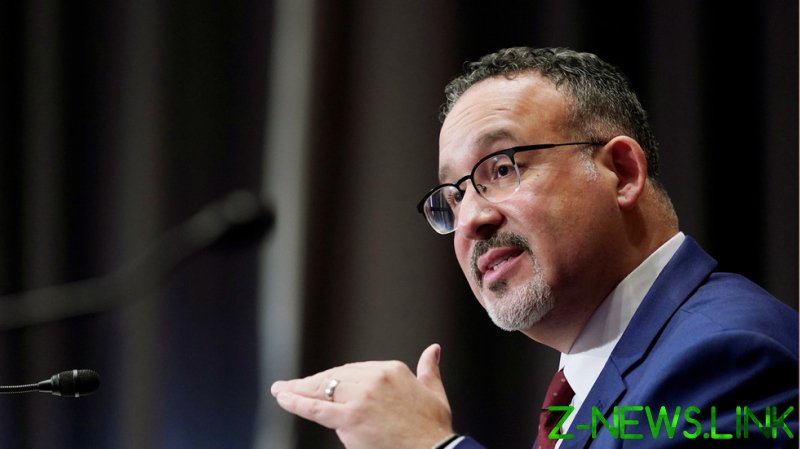 Cardona’s comments follow Gov. Ron DeSantis (R-Florida) becoming the latest governor to sign a bill prohibiting biological men from participating in girls’ sports. It is the eighth state to do so as debate around the issue heightens, with supporters saying bans infringe on transgender athletes, while critics point to biological advantages putting transgender athletes ahead of their biologically female counterparts.

“I can tell you this in Florida, you know, girls are going to play girl’s sports and boys are going to play boy’s sports, that’s what we’re doing. We’re going to make sure that that’s the reality. So the bill that we’re doing today will ensure fairness for women athletes for years to come in the state of Florida,” DeSantis said this month about the bill, adding that the ban is “based off biology.”

Cardona implied in his interview that this sort of treatment may be something the federal government targets.

“It’s their right as a student to participate in these activities. And we know sports does more than just put ribbons on the first-, second- and third-place winner,” he said. “We know that it provides opportunities for students to become a part of a team, to learn a lot about themselves, to set goals and reach them, and to challenge themselves. Athletics provides that in our K-12 systems and in our colleges, and all students deserve an opportunity to engage in that.”

Cardona’s stance could lead to friction between the federal government and state governments about whether transgender bans in athletics are legally enforceable.

The National Collegiate Athletic Association (NCAA) put out a statement distancing itself from DeSantis and any bans on transgender athletes, and promising to not hold events in states that enact such bans.

“You can’t be cowed by these organizations, particularly by woke corporations, from doing the right thing,” DeSantis said in response.