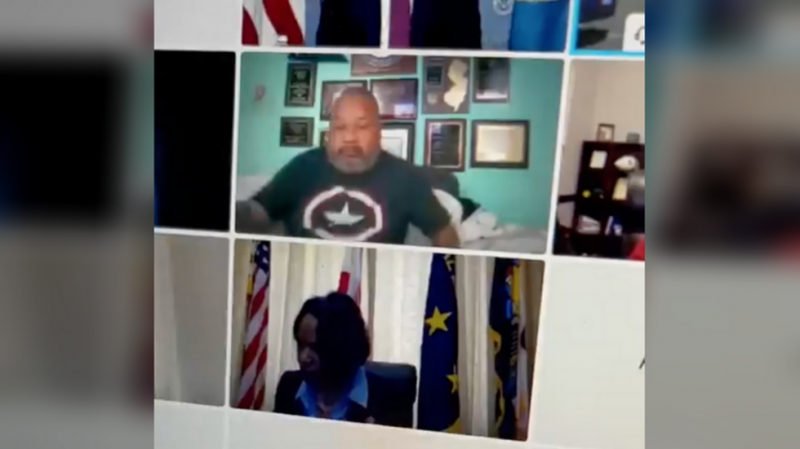 During a House of Representatives hearing on Thursday, Payne appeared unaware that his camera was on. A clip posted by Rep. Beth Van Duyne (R-Texas) showed Payne getting up at one point, his stomach exposed to the camera. He also appears to be wearing boxers.

“Another reason Democrats should get off Zoom and back to work. #TheStruggleIsReal,” Van Duyne tweeted when posting the footage.

Rep. Yvette Clarke (D-New York) was not phased by the mishap and continued speaking through Payne pajama show, but others were a bit more shocked, such as Rep. Kat Cammack (R-Florida), who covered her face in shock as she watched Payne expose his wardrobe.

While some found the clip humorous, many were also a tad offended by Payne’s laid-back attitude toward work.

“If taxpayers are paying you $174,000 per year, getting out of bed and putting some clothes on for work seems like it should be a minimum requirement,” Rep. Brian Mast (R-Florida) tweeted in reaction to the clip.

Rep. Lisa McClain (R-Michigan) expressed similar disapproval and added that such behavior is why Congress should return to “in person hearings immediately.”

Conservative strategist Rachel Bovard used the new clip to remind people of other virtual hearing mishaps that have occurred in Congress since last year.

“Maybe the House could, you know, go back to doing its work in person. Spare the embarrassment that are these virtual, work from home hearings,” she added at the end of her thread.

“It’s no secret that as a diabetic the Congressman has his weight struggles. But we try to stick to policy here in Congress,” Morgante tweeted.

This is not the first time Payne has made waves for his behavior during a virtual hearing. He was accused in March of sleeping on camera during a hearing of the Aviation Subcommittee of the House Committee on Transportation and Infrastructure.