US Congress passes long-awaited $1.9 trillion Covid-19 relief bill, Biden to sign it by end of week 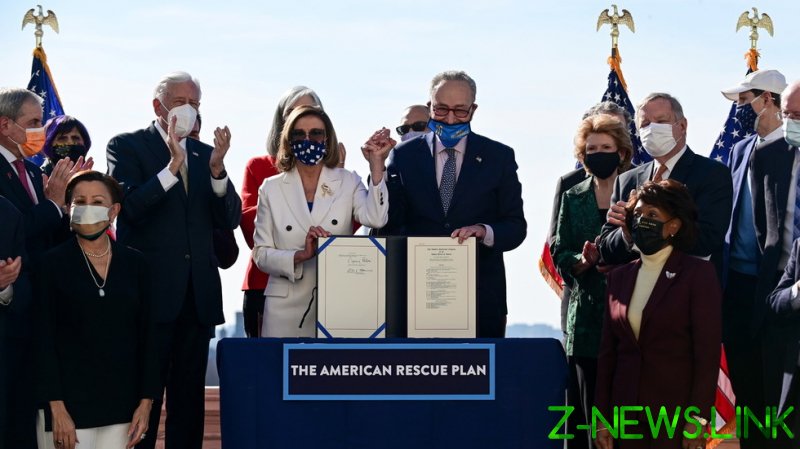 The final vote on Wednesday saw 220 representatives in favor and 211 opposed, breaking mostly along party lines. Republicans who opposed the bill were joined by one Democrat, Rep. Jared Golden (D-Maine). President Joe Biden is expected to sign the ARP sometime on Friday.

While the House adopted a stimulus bill two weeks ago, the Senate stripped out the $15 hourly minimum wage proposal from the original legislation, so it had to be voted on again.

The $1.9 trillion bill proposed by the Democrats does include a one-time direct payment of $1,400 to most Americans – less than the “immediate” $2,000 checks promised in January, during the Senate runoffs in Georgia.

Only $400 billion budgeted for the bill is set aside for that, however. Another $350 billion was allocated to aid state, local and tribal governments. The rest went to testing, treatment, vaccination efforts and many other priorities.

While Democrats have insisted that the plan is helping all Americans and pointed to media polls to claim it is widely popular, Republicans have criticized it as being filled with partisan pork-barrel projects that have little to do with actual coronavirus relief.

The bill includes $45 billion for expanding and subsidizing Obamacare, $50 million in “environmental justice” grants; $91 million in “outreach to student loan borrowers,” aid to “socially disadvantaged” farmers; and even $270 million to the National Endowments for the Arts and the Humanities, conservative radio show host Wayne Dupree pointed out.

States like California, New York, Michigan and Pennsylvania – run by Democrat governors who maintain strict lockdown measures even today – are supposed to get the lion’s share of the $350 billion aid package. Republicans also argued calling the bill “stimulus” is wrong, as nothing in it actually encourages production of goods or services.

“This isn’t about Covid relief. It’s about using a health crisis as an excuse to ram through a left-wing wishlist,” said Sen. Pat Toomey (R-Pennsylvania), a moderate who even voted to impeach former President Donald Trump.

Biden is expected to sign the bill on Friday, after his address on the anniversary of the first US coronavirus lockdowns – billed at the time as “15 days to slow the spread” of the novel respiratory virus.

Once the checks authorized by the ARP are sent out, Americans will have received a total of $3,200 from the government for that entire span of time.

His administration is reportedly planning a media “blitz” to promote the aid package, highlighting provisions such as rescuing union pension plans and the $1,400 checks to individuals – while leaving unsaid that this only applies to Americans who made less than $80,000, while anyone above that cutoff gets nothing.

While over 29 million Americans tested positive for Covid-19 and more than 510,000 died, tens of millions lost their jobs due to the lockdowns.