Home / WORLD / US airlines may soon weigh ‘obese’ passengers and raise fares, after draconian Covid lockdowns pile on the pounds

US airlines may soon weigh ‘obese’ passengers and raise fares, after draconian Covid lockdowns pile on the pounds 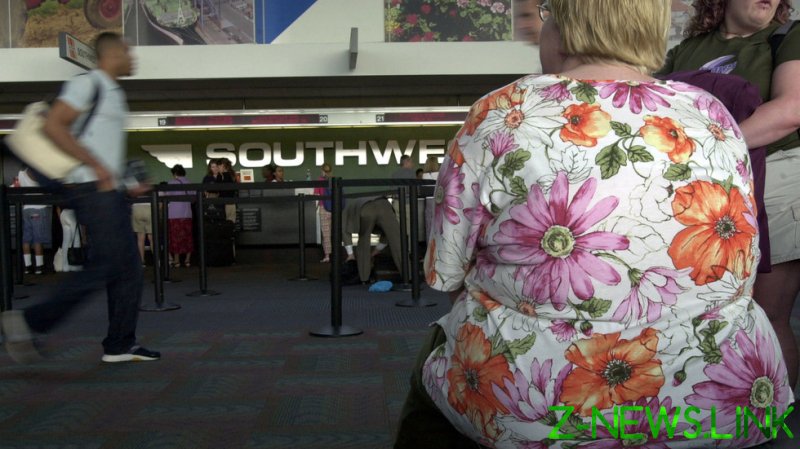 Oscar Wilde, the Irish poet and playwright, famously told US Customs in 1882 that he had “nothing to declare but my genius.” By comparison, the only thing US travelers may be required to declare is the extra weight they’ve gained since being forced to ‘shelter in place’ with their processed foods and Netflix since last year’s Covid-19 outbreak.

Although there is no scale big enough in the kingdom to know exactly how much weight Americans packed on during the pandemic, one scientific study, using Bluetooth-connected smart scales, calculated that, on average, people gained 1.5 pounds (0.68 kilograms) every month, or about 20 pounds (9kg) over the course of a year, give or take a cheesecake. In other words, no, those airline seats are not getting smaller, but rather your neighbor is getting larger.

Considering that America was already tipping the scales long before the coronavirus made landfall last year, that excess weight gain is of tremendous concern to the airline industry. In 2019 BC, that is, ‘Before Covid’, the Centers for Disease Control and Prevention (CDC) reported that 23 states had obesity rates between 30-35% of the population, while no state registered less than 20%. In fact, so great is the concern that passengers may be forced to queue up at airport weigh-in stations much as they are now required to do at the TSA body scanners.

“Americans are getting fatter, and the federal government wants airlines to find out how much fatter their passengers have gotten,” the airline blog View from the Wing reported, without feeling any need to sugarcoat the news. “U.S. airlines may need to start weighing passengers in order to comply with FAA rules.”

It’s not something most passengers give much thought about, but carriers need to calculate an aircraft’s weight and balance for safety reasons. That’s the reason so much time is spent weighing luggage. Now imagine a scenario where a couple dozen obese Americans find themselves booked on the very same midsize flight that can handle a maximum of 50 passengers. Although the crew has enough food on board to handle the demanding party, and is within its weight limit for luggage, it never took into consideration the excess bulk of Covidus Obesitus Americanus. Thus, at 30,000 feet the captain may come to the uncomfortable realization that he doesn’t have enough jet fuel to stay aloft until final destination. Needless to say, jettisoning luggage or passengers to save precious fuel is not an option at this point.

So here comes the really fun part: How in the world will the airline industry undertake the extremely sensitive task of weighing passengers before a flight? AirInsight Group, an aviation industry newsletter, warned, “The new FAA rules are going to make American air travelers very unhappy. VERY UNHAPPY.”

Understanding that it is wading into a very unfriendly woke town, the FAA emphasized in its guidelines that operators who undertake the program (the FAA recommends that operators perform such a review every 36 months) should “take care to protect the privacy of passengers. The scale readout should remain hidden from public view. An operator should ensure that any passenger weight data collected remains confidential.” In other words, no sirens blaring and security running when big Bertha smashes the scale.

Privacy issues aside, another point of contention will be the price of airline tickets, which look set to explode, too. Even without the need for a special  weigh-in campaign, the FAA has factored in a priori that the weight of American air travelers has ballooned, thus placing a limit on how many seats an airline may sell for any given flight.

AirInsight Group considered what will most likely happen with a typical 180-seater aircraft.

“Assuming all 180 seats are occupied by males, the new weights mean the aircraft will see its weight increase by 3,600 pounds. That is the equivalent of 19 passengers at the new weights. If the airline operating that aircraft has to remove 19 seats from inventory, that means 11% less revenue. In 2019 on average US airlines saw a net income of $3,658 per departure with an average fare at $407.07.  There’s not much margin and an 11% revenue hit will likely make many flights unprofitable.”

The conclusion by AirInsight is a dismal one: “You can be certain that fares are going to pop. And pop a lot.”

At this point, skinny frequent fliers may be kicking up a fuss, asking why they should be punished for the unhealthy habits of the obese. Although the idea of demanding a ‘fat tax’ on overweight fliers has been kicked around for years, the success of such legislation getting the nod in these days of social justice on steroids seems very unlikely. In fact, it’s not so difficult to imagine overeaters eventually being lumped together in a long list of minority groups allegedly victimized by ‘white supremacy,’ for example, and ‘systemic racism.’ Oh wait, that’s already happened.

More to the point, however, is the question: why did the US authorities impose a draconian lockdown regime against Americans that only succeeded in making people less healthy to fight off not just Covid, but other illnesses as well? A person need not be a medical professional to understand that the consequence of keeping people locked up inside of their homes for weeks on end leads to an increase in depression, binge-eating and lack of exercise. It also deprives these detainees of the incalculable advantages that come with being outdoors, like an increase in Vitamin D, fresh air and overall mental wellbeing.

Now Americans, slowly being released from their protracted Covid captivity, may soon find themselves unable to fly due to the prohibitive cost of airline tickets, driven up thanks in part to the surge in lockdown-related obesity rates.

All things considered, it is highly arguable that the draconian lockdowns imposed on millions of Americans, far from keeping them healthy, worsened the overall situation, causing them to become obese and more vulnerable to the worst effects of not only Covid-19, but of other diseases as well.