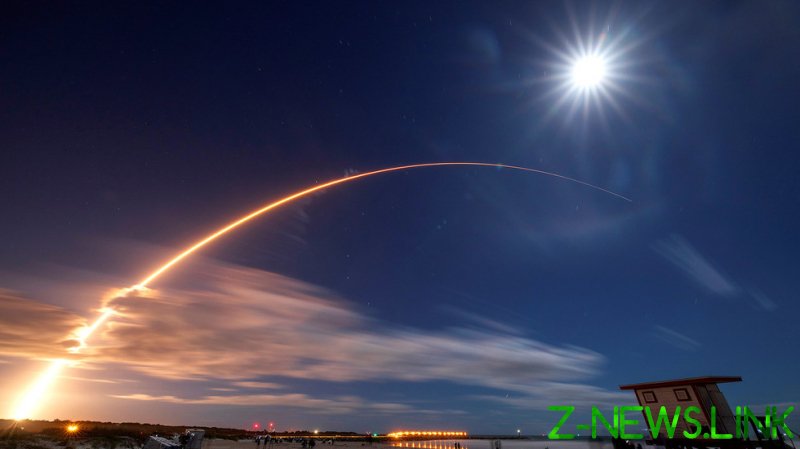 The Artemis Accords, proposed in May to set reasonable boundaries for the growing number of countries eager to stake a claim to Earth’s only satellite, have been officially unveiled on Tuesday. In addition to the US, the signatory countries are Australia, Canada, Japan, Italy, the UK, Luxembourg, the UAE, and Japan.

Subtitled “Principles for cooperation in the civil exploration and use of the Moon, Mars, comets, and asteroids for peaceful purposes,” the 18-page document colors resolutely within the lines of the aging Outer Space Treaty, which prevents any one country from staking a claim to the celestial body.

The Accords carefully avoid any reference to the Trump administration’s muscle-flexing new “Space Force” military division, officially launched in December with the stated aim of protecting American interests in space – “the world’s new war-fighting domain,” in the words of President Donald Trump. Instead, the Artemis Accords are described as a means of ensuring the “sustainable human exploration of the solar system.”

“What we’re trying to do is establish norms of behavior that every nation can agree to,” NASA administrator Jim Bridenstine told reporters on Tuesday on a call marking the unveiling of the Accords.

Signatories agree to share any scientific information they obtain from their work on the Moon “on a good-faith basis,” and pledge to rescue distressed personnel hailing from other signatory countries. One clause sure to generate reams of conspiracy theories involves an agreement to “coordinate in advance” regarding the public release of information on what any one country has discovered on the Moon – though “private sector operations” appear to be exempt from this requirement.

“Outer space heritage” is to be preserved, whether footprints from the original Apollo astronauts or – hypothetically – crashed alien spaceships. The signatories also promise to inform the United Nations Secretary-General before they start mining resources, though it’s not clear how this is to be enforced. Each nation pledges to avoid conflict with every other, though absent some sort of space-police, the honor system appears to be the dominant governing force. “Safety zones” may be declared to encompass resource-extraction or other operations with little if any oversight.

The casual reader might find the treaty’s signers an odd mix, given how few of the joining countries have actually landed a spacecraft – let alone a human being – on the Moon. And the long shadow cast by those nations absent from the treaty that have in fact left their mark in the lunar dust raises even more questions. After all, it wasn’t the US, but China, that explored the dark side of the Moon for the first time last year. And the US has long relied on Russian rocket-power to access the International Space Station – American astronauts hadn’t even taken off from US soil since 2011 until May, when billionaire Elon Musk’s SpaceX successfully sent a pair to the ISS from Florida’s Kennedy Space Center.

While NASA assured the press on Tuesday that many more countries would be joining the Artemis Accords before the year’s end, hinting that the snub might not be permanent, the chief of Russia’s Roscosmos space program, Dmitry Rogozin, reiterated his own concerns earlier this week, calling the Artemis program “too US-centric” for Russia to get on board. He had previously described the project as a lunar “invasion” and has repeatedly expressed disdain for Washington’s politicization of a satellite that is not supposed to belong to anyone under the 1967 Outer Space Treaty.

Rogozin compared the US dominance of the Artemis project to NATO, describing it as “There [in the center] is America, everyone else must help and pay,” and suggesting Russia was not interested in lending its credibility to such a vanity project. He has even compared it to the US’ ham-handed attempted conquest of the Middle East, raising an eyebrow at the inclusion of earthbound nations in this celestial “coalition of the willing” while keeping Russia at arms’ length for appearances’ sake.

But while Russia is an honorary – if snubbed – guest at the lunar banquet thanks both to Sputnik and to the US’ long reliance on Moscow’s rocket-power to get American astronauts into the stratosphere, China has even more of an uphill battle to fight to win its way into the Moon Club – never mind the Yutu-2 rover that recently became the first human-made object to traverse the surface of the dark side of the moon.

Bridenstine hinted that including China in the Accords would require a legal overhaul. “At this point, it’s just not in the cards and we at NASA will always follow the law,” he told reporters.

Despite the Artemis Accords’ alleged US-centric nature, the Outer Space Treaty forbids any one country from staking claim to any celestial body, including the Moon. However, it does not stop nations from extracting resources from those bodies, an activity the Artemis Accords make it clear multiple countries are eager to begin.

However, the Artemis signers, who hope to build a Lunar Gateway orbiting the Moon in the model of the ISS, might have competition in the near future. Russia and China announced in July that they were interested in building their own Moon research base together, though the idea is still in its infancy.