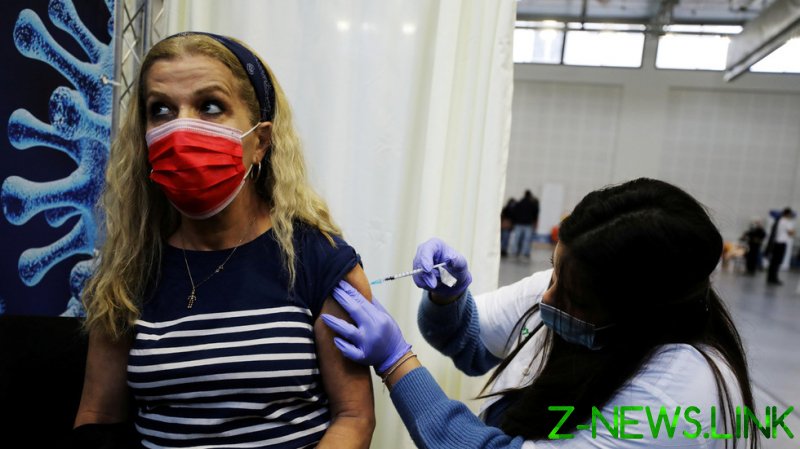 The PM said that the proposed “quick legislation” would allow local authorities to “receive data” on those who have not been vaccinated yet. The aim is to “encourage them to be vaccinated and save lives,” Netanyahu explained at a cabinet meeting on Sunday.

According to the Haaretz newspaper, the idea was approved by the country’s coronavirus cabinet and by the National Security Council. After some additional work it will be presented before Israel’s parliament.

Netanyahu said that 570,000 people over the age of 50 have not been administered the vaccine yet, which is 220,000 higher than the government’s previous estimate.

“I remind you of the most dramatic piece of data: 97 percent of deaths and 93 percent of severe cases are in this group,” the PM noted. He reported earlier this month that nearly all recent deaths were among the people who did not take the vaccine.

The ministers agreed that the data on vaccination must be protected from unauthorized access, reports said. Nevertheless, Tourism Minister Orit Farkash-Hacohen urged the government to “be cautious about harming the right to privacy of those who are younger.” She called Netanyahu’s proposal “precedents we have to be careful with.”

In a similar vein, Mordechai Kremnitzer, a researcher at the Israel Democracy Institute, expressed concern that the PM’s legislation will be used as a way of “pressuring” people to get vaccinated, and may lead to a violation of privacy.

“Bulls shouldn’t be brought into china shops, and that’s exactly what Netanyahu’s proposal to the cabinet does,” Kremnitzer wrote in an op-ed published by Haaretz. He argued that “legislation that needs to be intelligent and effective should never be pushed through in haste.”

Israel has been the global leader in terms of vaccination rate, but the campaign to vaccinate as many people as possible appears to have lost some steam in recent weeks. The Times of Israel reported a “drop in public enthusiasm” toward immunization in early February. The government is now trying to reinvigorate the campaign by propping up pro-vaccine messaging and combating disinformation.