Home / Video news / Under the building of the Cabinet unknown stole a car Deputy. Video

Under the building of the Cabinet unknown stole a car Deputy. Video 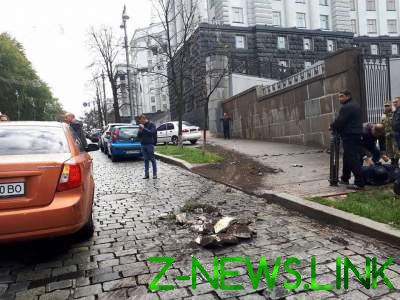 The incident occurred in broad daylight.

The driver of the Mercedes premium, which made a serious commotion in front of the Cabinet of Ministers of Ukraine in Kyiv on Thursday, October 5, turned out to be a thief. This was reported in the Pechersk district police Department.

The car was stolen laptop and bag with documents in the name of the people’s Deputy from Blok Petro Poroshenko Alexander Granovsky.

The footage, which was published by the Internet users, is seen as the Cabinet pulls expensive Mercedes. On the hood of the car catches a man trying to stop the driver, but, as it turns out, the driver managed to escape.

While witnesses reported that the man driving the Mercedes was in such a hurry to leave, which further demolished concrete flower bed and damaged the car.

At first passers-by thought the driver was in a poor state of repair, but the arrival of the police it became clear that the Mercedes was stolen.

The head of the security Agency “Antikiller” Nicholas Sborshikov wrote in Facebook that the theft occurred at the moment when the driver of the car left the salon, it left the door open and the engine is running.

“Despite the fact that the driver was in the immediate vicinity of the car, the unknown literally jumped in the car and committed the theft. Driver side was followed by attempts to prevent the theft, he jumped on the hood of the Mercedes, however, these actions did not help to stop an intruder” – he wrote.

It soon became clear that the stolen Mercedes was found.

“The car was found near the metro station “Petrovka” and returned to the owner. Who stole it is not known”, – told the “Observer” in the Pechersk rayupravleniya police. Also the police reported that criminal proceedings are opened under article “theft”, a search for the attacker.