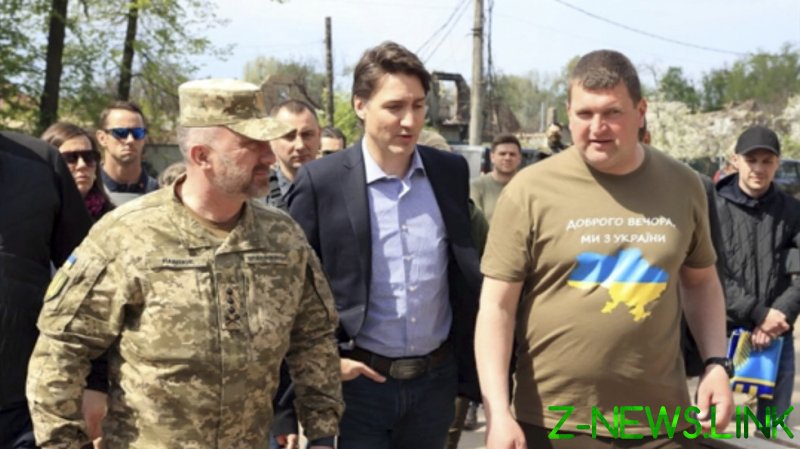 Canadian Prime Minister Justin Trudeau visited Ukraine on Sunday to pledge support and meet with President Volodymyr Zelensky, while US First Lady Jill Biden made a separate trip to meet with Zelensky’s wife. While US President Joe Biden has not traveled to Ukraine, visiting Kiev has become a rite of passage for other Western leaders.

Trudeau’s trip, which was not announced beforehand, saw him tour the battle-scarred Kiev suburb of Irpen and raise his country’s flag over the newly-reopened Canadian embassy in Kiev, ahead of a scheduled meeting with Zelensky. Trudeau’s office said the meeting is intended to “reaffirm Canada’s unwavering support for the Ukrainian people.”

Canada has committed over $91.6 million in military aid to Ukraine since January, and its 2022-2023 budget allocates an additional $388 million in arms for Kiev. Among the weapons already sent by Canada are 155mm howitzers and shoulder-fired anti-armor ammunition.

Separately, Jill Biden met with Zelensky’s wife Olena at a village near the Slovakian border. Olena Zelenska and the couple’s children have remained in safety in western Ukraine since the outbreak of hostilities in February.

US President Joe Biden has not visited Ukraine, with security concerns apparently getting in the way of any potential trip by the American leader. Entering Ukraine from Poland would involve an “eight-hour train through a war zone,” former White House Press Secretary Jen Psaki explained last month, and hence was “not in the plans for the president of the US.”

However, a host of US lawmakers from both parties have made the trip, as have Defense Secretary Lloyd Austin and Secretary of State Tony Blinken. The Biden administration has also sent Ukraine nearly $4 billion in military aid since Russia launched its offensive, and Biden has urged Congress to pass his $33 billion Ukraine aid package, $20 billion of which would fund weapons and other military support for Kiev.

Furthermore, Biden will sign the Lend-Lease Act of 2022 on Monday, reviving a piece of World War II-era legislation to allow the US to export unlimited quantities of weapons to Ukraine. Moscow has repeatedly condemned the US and its NATO allies for delivering arms to Ukraine, insisting that the inflow of supplies will only prolong the conflict.

Aside from Trudeau and Mrs. Biden, dozens of Western politicians, lawmakers and dignitaries have visited Kiev since Russian troops pulled back from the city’s outskirts early last month. The prime ministers of the UK, Poland, the Czech Republic and Slovakia are among those who have traveled to the Ukrainian capital.