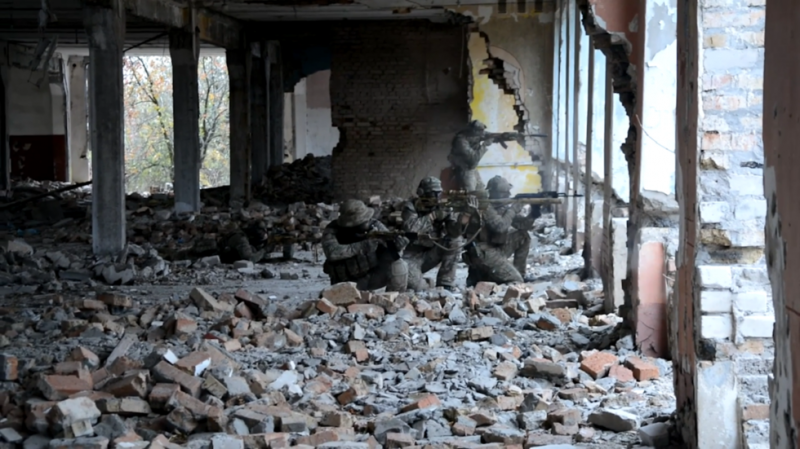 The Russian Defense Ministry released on Friday what it claimed to be staged combat scenes filmed on behalf of the Ukrainian government and paid for by the British government. The two short clips appear to be raw footage of what looks like a war movie.

The filming of the videos took place on May 28 in the town of Meshkovka in Ukraine’s Nikolaev Region, the ministry said. A train station of the same name is located on the outskirts of the provincial capital in the south of the country.

One of the videos shows two armored vehicles facing the camera. At the command of a woman, who appears to be the film director, the backdoor of the closest vehicle opens, and a group of armed men in uniform wearing red armbands starts pouring out. Several others rise from the grass around the second vehicle in the distance and start moving forward, their weapons raised.

The second clip is a shootout scene, with a group of armed uniformed men retreating through rubble while firing back at an unseen enemy. Pyrotechnics appear to simulate enemy fire. At one point, a professional-looking film crew comes into view.

According to the Russian Defense Ministry, the videos are meant to inspire confidence in Kiev’s fighting abilities both in Ukraine and Western nations, and to showcase the “supposed effectiveness” of Western weapons supplied to the country.

The shootout scene, according to the statement, is meant to be a recreation of a heroic Ukrainian stand against overwhelming Russian forces that never actually happened.

The first video, the Russian military claimed, is supposed to show advancing Russian troops, who were played by a group of Ukrainian militias. The statement claimed the film crew couldn’t get any actual Russian armored vehicles for the scene and used Ukrainian ones instead.

“The next filming session is scheduled for June 5 and 6,” Defense Ministry spokesman Major General Igor Konashenkov claimed. “The footage will be of staged testimony by ‘ordinary Ukrainians’ accusing Russia of supposedly firing at peaceful communities on purpose.”

The ministry claimed that the UK not only funded the filming, but also offered its creative input. The project was launched “amid Kiev’s political disaster in Mariupol and military defeats in the Donbass,” the statement said.