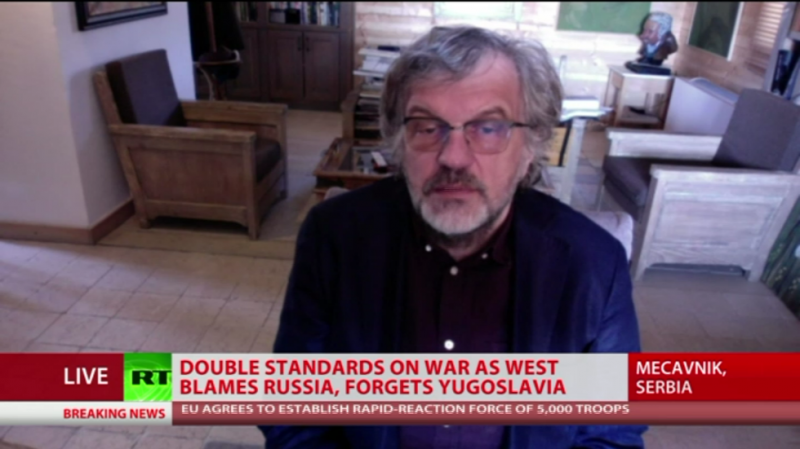 The current conflict over Ukraine is basically the sequel to the 1999 NATO bombing of Yugoslavia, the celebrated Serbian filmmaker Emir Kusturica told RT on Tuesday, pointing out the continuity of Russophobia and the West’s disdain for international law.

On March 24, 1999, NATO launched its air war against what was then the Federal Republic of Yugoslavia. The bombing continued for 78 days and ended with a negotiated armistice, allowing UN peacekeepers into the rebel province of Kosovo.

Because Russia was weak and ruled by the “Western oligarchy” propping up President Boris Yeltsin, Serbia was “absolutely alone” in fighting for its freedom, borders and survival, Kusturica told RT from his home in Mecavnik.

This was “when international law was changed to what I call ‘humanitarian’ law,” the filmmaker said, alluding to NATO’s official reasoning that it was trying to stop a humanitarian disaster in Kosovo, and the subsequent doctrine of “responsibility to protect” created to justify the war.

“This war did not just come out of nowhere. This is a continuation of something seeded much earlier,” the director said, referring to the current conflict over Ukraine. Kusturica sees a continuity of Russophobia in the West, which rejected Russia’s offer of partnership after the Cold War.

NATO claimed the bombing brought peace, but the only thing it achieved was to enable the October 2000 color revolution, Kusturica noted. Yugoslav President Slobodan Milosevic was overthrown in what would become a template for two such revolts in Ukraine, first in 2004 and then in 2014.

Serbs aren’t pro-war, they just remember 1999 and understand the causes of the current conflict in Ukraine, Kusturica told RT.

“In a unipolar world, nobody is paying a price for [their] moves,” he pointed out. “Now we’re facing the deconstruction of power around the world, and what matters I think in the end is what kind of weapons you have.”

Back in 1999, Serbia did not have the most modern weapons – Yeltsin blocked the delivery of air defense systems that might have made more of a difference, Kusturica said. Even so, the Serbs managed to shoot down a US “stealth” bomber. They remember NATO’s “humanitarian” bombs even today, he added.

“They never came on the ground, because they know how the Serbian people fight,” Kusturica pointed out.

Yugoslavia ended in 2006, when Montenegro declared independence. The ethnic Albanian provisional government in Kosovo – backed by NATO – did so in 2008, though without recognition from Belgrade. Serbia is now an “island” in a sea of NATO states on almost all sides. Yet it is still a place where not all media are under Western control, and where one can still raise a voice against injustice and censorship, Kusturica said.

He condemned what he described as an “almost incredibly satanic version of cancel culture” that now bans Russian conductors, composers and authors, stopping just short of burning books in city squares like the Nazis used to do.

Russian authors like “Chekhov, Pushkin, Dostoevsky, Tolstoy are inseparable from what we call European culture,” Kusturica said, arguing the West is now attempting to cut them off, but that the world will “eventually see these pieces coming back together.”

Born in what is today Bosnia-Herzegovina, Kusturica made his first feature film in 1981, going on to direct a series of award-winning features and try his hand at acting, music and writing as well. He resides in an ethnic-themed village in western Serbia, originally built as the set for his 2003 film ‘Life is a Miracle’.