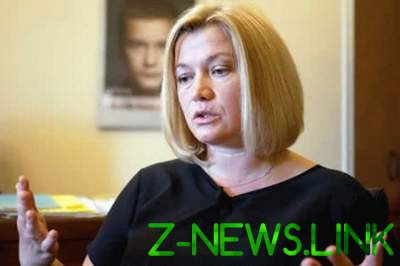 This proposal differs from the others.

First Vice-speaker of the Verkhovna Rada, Ukraine’s representative to the Humanities subgroup of the TAG Irina Gerashchenko offers Russia to exchange the Ukrainian citizens residing in the dungeons of the Russian prisons and places of detention in ORDO, all the convicts in Ukraine. This format was initially considered the best, but with an eye on Western partners and the position of Moscow, Kiev forced to divided the political prisoners in Russia, and illegally detained in the Donbas. Now the “masks are removed”. What is behind this apparently political statement of the Ukrainian negotiator?

Let’s start with the fact that Facebook I. Gerashchenko noted that “Oleg Sentsov is continuing the hunger strike with a demand to release it and all Ukrainian political prisoners in Russia”, and the requirement shared by the Ukrainian side.

She recalled that in the prisons of the Russian Federation and annexed the Crimea contains about 70 Ukrainians and Crimean Tatars. Several dozen military and civilian keep gangs in ORDA. Kiev offered Moscow to transfer the 36 offenders with a Russian passport. There was no answer. In turn, the “negotiators” ORDA require 300 militants in exchange for 20 people, which they have kept, as they claim. No more…

See also:  Poroshenko not preclude the attack of Russia on sea ports of Ukraine

Gerashchenko suggested that “formula” – all in all. Ukraine returns of Russians and “Donetsk-Luhansk” militants and DNR/LNR and Russia give to ours, including such of the prisoners as Sentsov, Sushchenko, Baluch, Karpyuk, gentry, Kolchenko and others, of whom the whole world knows.

Putin has repeatedly made clear that nobody will dictate terms. he didn’t want to give up, despite the requests of the presidents, for example, the Makron. Moreover, he does not agree to such an exchange, not knowing what was going to win. The fate of people with a Russian passport it does not have fundamental importance. And Kiev knows it.

It can be assumed that Gerashchenko went for broke. Realizing that dialogue is useless, she wants the whole world agreed that Russia and the militants of Donbass – is a unified whole. Therefore, the communication can be done holistically.

Earlier, Irina Gerashchenko said that almost all Ukrainian prisoners, which has previously been exchanged, there are traumatic brain injury, and twelve of them were subjected to sexual violence.

See also:  The General staff described the scale of the exercises Sea Breeze-2019

In an interview with “Ukrainian truth”, she said that after the liberation of the people themselves admitted that they had been raped in captivity.

All who were captured by militants and then exchanged are physical. Also check their special services. Irina Gerashchenko said that “not only because of their somewhat suspect” and to gather information about prisoners, about which we know nothing”.

First Vice-speaker said that all of the captivity returned with a terrible traumatic syndrome, so they sent for psychological rehabilitation.

“First taste of freedom is also not easy. That is why I consider important the creation of the Ministry of veterans”, – explained Irina Gerashchenko, focusing on the fact that the new Agency would take care of like former prisoners, and all the veteran volunteers who also need rehabilitation, because the people saw the death and kill the enemy, is emotionally very worried.