Ukraine court orders house arrest of opposition leader Medvedchuk, who is suspected by Kiev of ‘treason’ 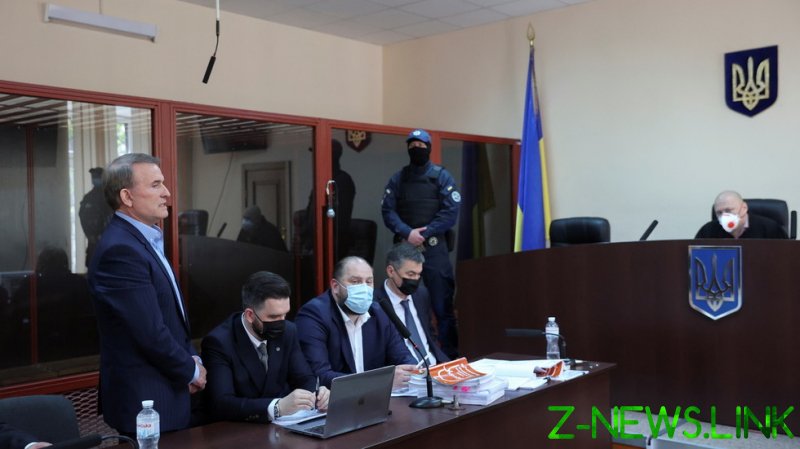 A judge in Kiev on Thursday denied the prosecutors’ request to jail Medvedchuk, but placed him on round-the-clock house arrest until July 9. His passport was also confiscated. A group of lawmakers had offered to pay Medvedchuk’s bail, while outside the court a group of nationalists had gathered calling for his imprisonment.

Prosecutor General Irina Venediktova announced on Tuesday she was seeking his arrest on charges of treason and attempted theft of “national resources in Ukrainian Crimea [sic].”

Venediktova also said that the SBU – Ukraine’s successor to the Soviet-era KGB security agency – had failed to find Medvedchuk during a raid on his home, and that his whereabouts were unknown.

Appearing in court on Thursday, however, the opposition leader told reporters that the case is “fabricated” and that he will consult with his lawyers about what steps to take next.

Medvedchuk’s political party, Opposition Platform – For Life (OPZZh) is the second-largest party in the Verkhovna Rada, the parliament of Ukraine, after President Volodymyr Zelensky’s ruling Servant of the People (SN). Much of Medvedchuk’s support comes from Russian-speaking residents in the east and south of Ukraine, and he has advocated better relations with Moscow and been critical of Kiev’s attempts to turn to the West that followed the 2014 Maidan.

Following a national poll earlier this year that showed the Opposition Platform in the lead, the government in Kiev started talking about “treason” and moved to shut down a Russian-language news group owned by Medvedchuk’s associate Taras Kozak, who is also now facing treason charges.

A government spokesman described the crackdown as being “about effectively countering fakes and foreign propaganda.” The move was applauded by Washington. However, critics noted that the channels affected produced much of their content within Ukraine, for Ukrainian Russian-speakers.