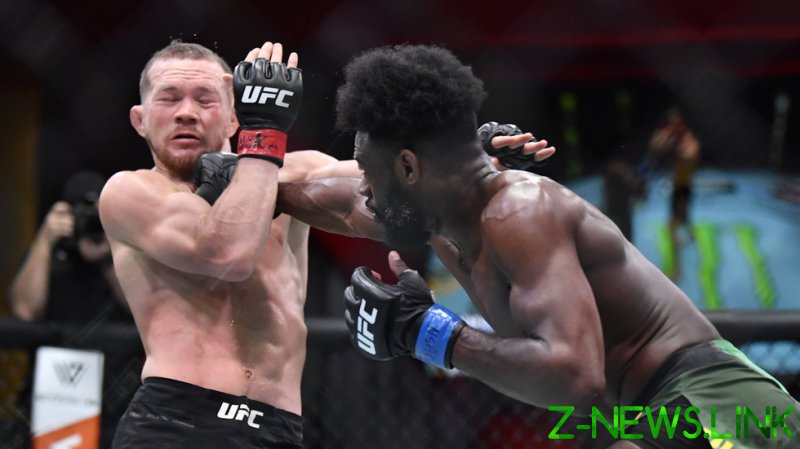 UFC champion Aljamain Sterling has promised to show off a brand new box of tricks when he attempts to defend his crown against former titleholder Petr Yan in Jacksonville, Florida next weekend – including the now infamous Will Smith slap.

Sterling and his Russian foe Yan are set to rematch more than a year removed from their highly controversial first fight which was won by the American after Yan was disqualified for landing a blatantly illegal knee strike to Sterling’s head in the fourth round.

At the time of the DQ Yan was leading on the scorecards of all three judges, with Sterling looking exhausted in the cage as Yan pressed forward looking for a finish – but the illegal blow ended any hopes Yan had of claiming a win, and led to him forfeiting his 135lbs title in the process.

But speaking ahead of the fight, Sterling says that he will borrow a trick from another Oscar winner when the two warring bantamweights come face-to-face in the Sunshine State late next Saturday night.

The bookmakers have Yan as a heavy favorite heading into the fight but Sterling – who hasn’t fought in the 13 months after his first tussle with Yan – says that he has spent time recovering from niggling injuries and sharpening his already impressive skillset, and is eager to show off his new firepower.

“I am a certified weapon right now, and ready for battle, and I can’t wait to go out there and unleash these tools, and put a little beatdown on this guy that he’s been deserving for well over a year at this point, and move on to the victim,“ he said.

“I know the Vegas oddsmakers got me as a big underdog. This is what everyone wants to go out of their way to tell me. I don’t give a s***, at the end of the day, I bet on me. And, I know that betting on me is right. I bet on me the last 6 times and I’ve won every single time.”

And as soon as that first bell rings in Florida, Sterling says that Yan will be aware that he has bitten off more than he can chew.

“He’s gonna feel a pressure like he’s never felt before, and this time when I take him down, he ain’t getting up,“ he vowed.