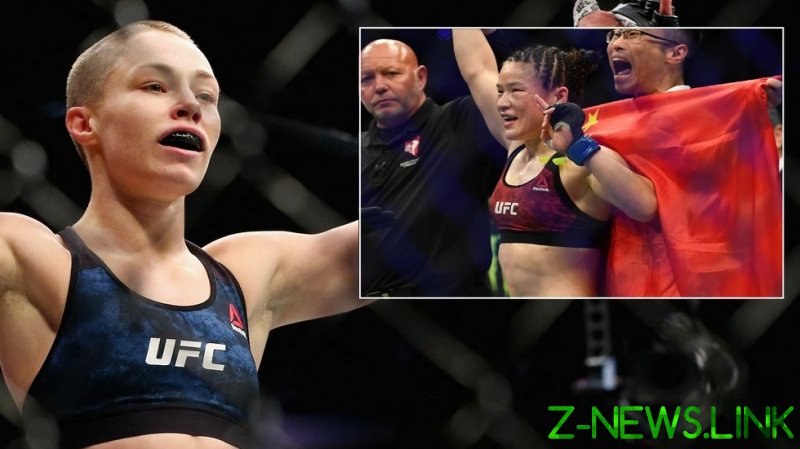 The Lithuanian-American caused uproar this week when talking to a media outlet from her parents’ country in the build-up to UFC 261.

First revealing she had recently seen a documentary entitled ‘The Other Dream Team’, about the Lithuania men’s basketball team at the 1992 Olympics and the struggles they faced under Soviet rule, Namajunas added: “After watching that, it was just a huge reminder of like, yeah, it’s better dead than red, you know?

“And I don’t think it’s any coincidence that Weili is red. That’s what she represents.”

“It’s nothing personal against her, but that’s a huge motivating factor of why I fight, and I fight for freedom,” Namajunas added.

“I’ve got the Christ consciousness, I’ve got Lithuanian blood, and I’ve got the American dream. All of those things I’m taking with me into the fight,” she concluded.

Forced to respond to criticism over the outburst, ‘Thug Rose’ doubled down on her diatribe in an interview with ESPN.

“My opinions are based on my experiences,” Namajunas began again.

“It’s not something I looked up on YouTube. This is an actual reference to a documentary. If you’re confused about any of my opinions, you can watch the documentary, and you could get a good idea as to what my family had to go through, the reason I’m in the United States today, the reason that I do mixed martial arts, all of that stuff.”

“I’d probably have a really different life if it wasn’t for just everything in that documentary, how Lithuanians had to struggle with communism oppression,” she admitted.

“The reason that I brought it up and that I referenced it is because the reporter suggested that I had animosity towards past opponents, and that’s what maybe caused some motivation in those fights and that this one there’s no animosity, so maybe there’s a lack of motivation, but that couldn’t be further from the truth,” Namajunas explained.

Insisting that her remarks are nothing personal, fomer strawweight champion Namajunas said: “I love Weili.”

“I don’t know her. I know she wants to be friends and all that stuff, and it would be great to get to know her, if we could, if it’s possible.”

But that still didn’t stop her from suggesting that the reigning 115lb ruler might be forced what to say and how to act by the powers that be in Beijing.

“To make fun of tragedy is a true sign of one’s character,” Weili wrote on the same platform.

“People are dying, someone’s father, someone’s mother, someone’s child. Say what you want about me if it makes you feel stronger but do not joke about what’s happening here. I wish you good health until March 7th. I will see you soon,” she promised, just days before her eventual revenge in the octagon.