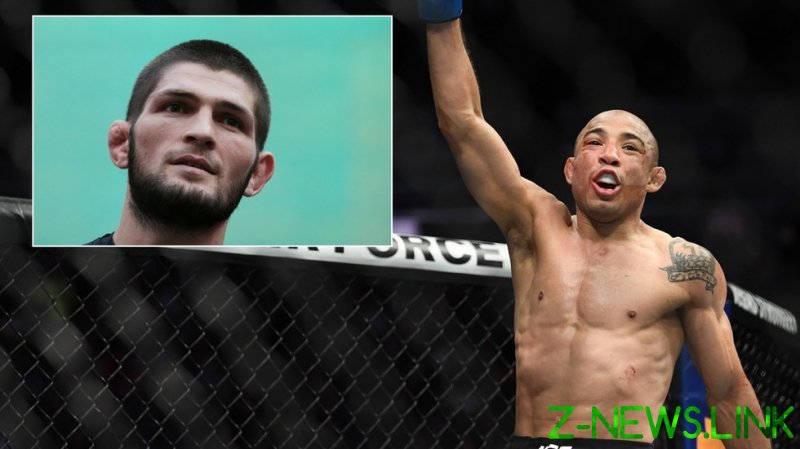 Before Khabib was heralded as a true MMA pound-for-pound standout, there was Jose Aldo. The Brazilian wrecking machine put forth a decade-long undefeated streak between both the WEC and UFC and was, for quite some time, the most feared fighter in the sport; a buzzsaw of aggressive knockout punches and leg-breaking kicks.

Aldo’s luster began to fade with one left-hand courtesy of Conor McGregor in late 2015 – and would lead to just three further wins in his next eight contests, with Khabib soon succeeding him as the sport’s most feared fighter.

Since Aldo’s last defeat, a July 2020 TKO defeat at the hands of Petr Yan, the 35-year-old has earned impressive wins against both Pedro Munhoz and Marlon Vera to show that there might be some championship life left in the old dog’s legs yet.

Last August, though, Khabib showed a dissenting voice when it came to Aldo’s resurgence.

“A guy wins one fight and everyone starts talking. When Conor [McGregor] fought [Donald] ‘Cowboy’ [Cerrone], he looked like a lion. When he fights stronger opponents, he looks like a scared chicken. Fighting top fighters shows your worth.

“Let [Aldo] fight Petr the same way. Then we can say he’s peaking again. You saw what he did. He closed up and waited for the ref to stop the fight. That shows that you’re not at your peak. If you’re getting hit and you’re conscious and you’re not defending yourself, I call those fighters businessmen. They come out to make money.”

But Aldo, who will return to action when he fights Rob Font in early December in what will be the 38th bout of his professional career, doesn’t agree with Khabib’s analysis – and alleged that the Dagestani turned down a fight with him in 2016 because his father, the late Abdulmanap, “didn’t think it was good” for Khabib.

“He’s saying you can’t peak again, but we just saw an example with Glover [Teixeira], who got there, lost, and got there again at age 42 and won [the UFC title], completely dominated the champion, took him down and submitted him,” said Aldo of the newly-crowned UFC light heavyweight championship.

“[Israel] Adesanya himself fought [Jan Blachowicz] for five rounds, a pretty boring fight, two high-level athletes, and Glover, who’s older than me [won]. Sometimes Khabib talks too much. He’s not doing much these days, he’s retired, so he’s looking for [attention] that way.”

Aldo added that discussions took place in 2016 for what would have been an interim lightweight but was met with a brick wall by Khabib – “a guy we never thought would turn it down.”

“I was traveling when [my coach] ‘Dede’ [Pederneiras] called me,” Aldo said via MMA Fighting. “The [UFC] had offered me this fight and we took it. I said, ‘What? I want that, I’m in.’

“I respect everybody, but that opportunity… I was the featherweight champion, and [Nurmagomedov] didn’t think it was a good [idea]. I don’t know if he was expecting to fight somebody else, I don’t know what he was thinking at the time. I think it could have been a great fight.

“I wanted to test myself. Everybody always asks me… It’s funny, everybody thinks I train wrestling a lot. No, man, I usually do the same training with my team, so, to me, it would have been a really tough test. I’ve always fought against American wrestling and it was hard to take me down, so it would be a tough test against him, if he would be able to impose his takedown game against me knowing that I have pretty good takedown defense as well.”