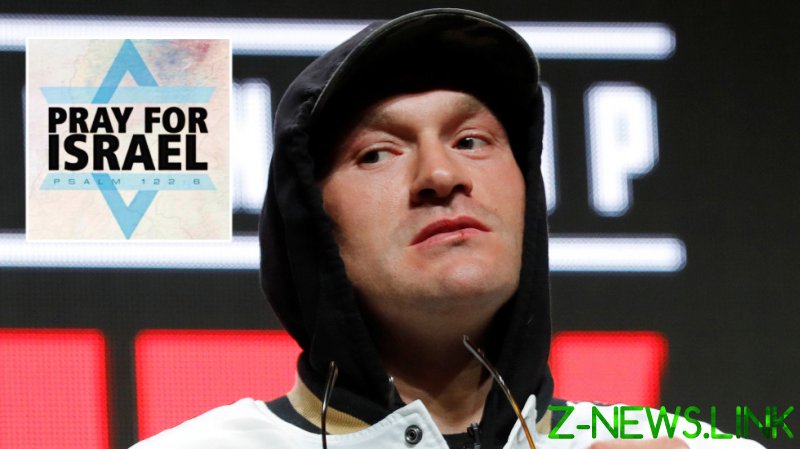 WBC heavyweight king Fury seemed to have unexpectedly waded in to the conflict between Israel and Palestine when a symbol appeared on his Instagram page telling his vast following of more than 4.1 million to hold Israel in their prayers.

That led to uproar and accusations of hypocrisy against the UK giant, who has previously called to “free Palestine” via social media and messages on his training gear.

“Last night, I went on Instagram and found a political post on my story,” Fury explained after the post was removed, even inviting suggestions that Top Rank boss Bob Arum, who has an orthodox Jewish background and is one of the main organizers of Fury’s megafight with Anthony Joshua which is expected to take place this year, could have influenced the post.

“Whoever’s on my story: get the f*ck off there, you little b*stards. I don’t get involved in any political conflicts or anything like that.

“As we all know, I am a man of the people. I represent all people from around the world – every country, not just one.

“I don’t just select one country. We all know that’s not a real post by the Gypsy King.

“God bless you all, peace out and God bless all the people who are in conflict at the moment.”

It is unclear whether Fury was suggesting that his account had been hacked. A devout Christian who often quotes extracts from the bible, the controversial figure’s claims not to be interested in involving himself in such matters could be interpreted as a contrast to his previous outspoken beliefs on the situation in the region.

“God’s people would not do this,” he once posted, adding the hashtags “stop the rockets”, “children are dying”, “Jesus is lord” and “stop the killing of innocent people”.