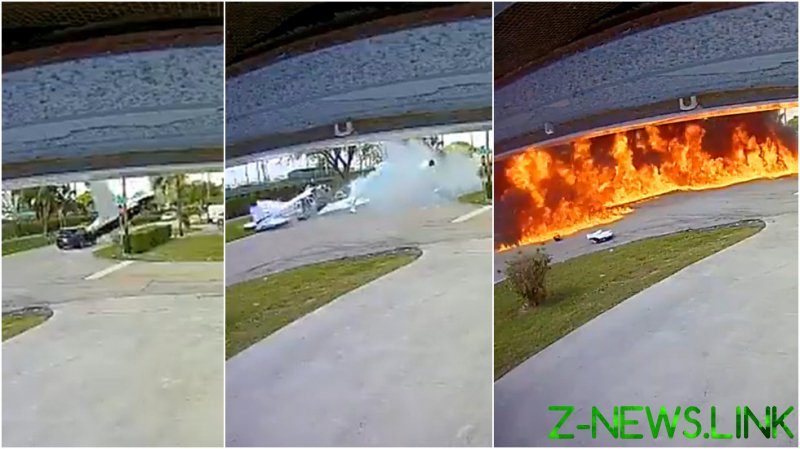 The single-engine plane crashed down outside the North Perry Airport in Pembroke Pines, Florida on Monday afternoon, killing the two people on board. The incident was captured in shocking footage, showing the craft as it careened into a vehicle and skidded across the ground, with its fuel igniting a sizable fire.

“We heard like a bomb, like a tremendous noise and everything was on fire and it dived into a car,” a witness, Anabel Fernandez, told a local CBS affiliate. “I live right here. I walk with my babies every day. The plane could have got us all. I am in shock.”

The woman and child inside the car were initially trapped, but have since been freed and are receiving treatment at a nearby hospital. Both are reportedly in serious condition, though none of the victims’ identities, nor the age of the child, have been released.

Photos of the aftermath of the crash have also emerged, depicting a mangled SUV and wreckage scattered around the area, as well as an image of the plane itself, which was seen covered in foam after fire crews extinguished the blaze.

While the cause of the crash remains unknown, the Pembroke Pines Fire Department said the pilot may have reported engine trouble. In addition to local authorities, both the Federal Aviation Administration and the National Transportation Safety Board said they would investigate, with the latter agency leading the probe.