Home / WORLD / Trump’s critics slamming him for Taliban ‘endorsement’ dislike him so much, they are seemingly willing to argue for endless wars

Trump’s critics slamming him for Taliban ‘endorsement’ dislike him so much, they are seemingly willing to argue for endless wars 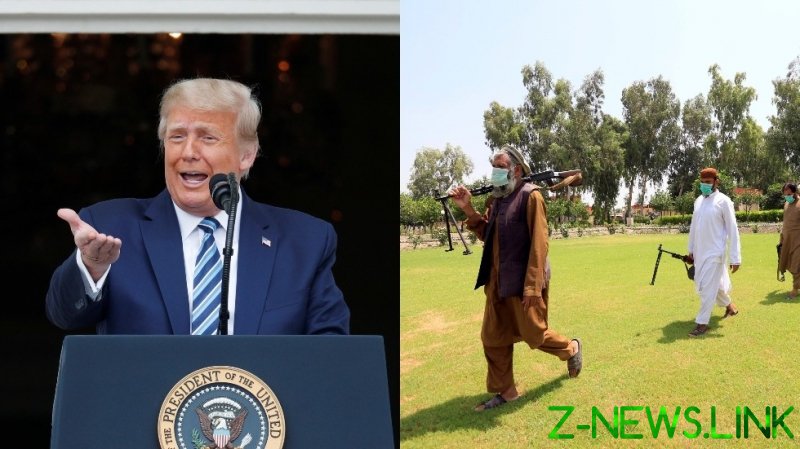 “We hope he will win the election and wind up US military presence in Afghanistan,” Taliban spokesman Zabihullah Mujahid told CBS News in an interview highlighting the unusual support.

Mujahid said Trump’s “America first” policy breaks with past administrations’ need to be “cops for the world.”

The Taliban was even concerned about Trump’s recent bout with Covid-19.

“When we heard about Trump being Covid-19 positive, we got worried for his health, but seems he is getting better,” an unnamed senior leader told the news outlet.

“Trump might be ridiculous for the rest of the world, but he is sane and wise man for the Taliban,” another anonymous senior member said.

Tim Murtaugh, communications director for Trump’s reelection campaign, rejected the support of the Taliban in a statement.

‘The Taliban endorses Trump’ though is far too tempting of a line to stay away from, so the president’s critics have taken to social media to highlight the odd interview and use it as a way to argue against Trump’s reelection.

What all of these tweets and takes ignore is the reason this militant group is saying they hope Trump wins in November: so US troops can finally leave a land they have been occupying for nearly 20 years.

While Biden’s previous administration was headed by a man elected on the promise to end wars that even then already seemed drawn out and pointless, that administration’s foreign policy turned out to be nearly as aggressive as the one before it.

Trump, of all people, has made the most steps towards actually ending a conflict that has claimed the lives of thousands of Afghani citizens and US troops. There are now fewer than 5000 troops in Afghanistan, and a February pact with the Taliban promises a — hopefully — full withdrawal by next year. Also included in the pact are the conditions that the Taliban must completely break with al Qaeda and negotiate peace with government rivals.

Trump himself recently said he wanted troops home by Christmas, though it’s unclear if that timetable is realistic as other officials have pointed to spring or summer of 2021 as more likely.

Trump is doing exactly what Obama was essentially promising when he ran against the late John McCain in 2008.

Obama’s second-hand man, Biden, however, has argued for keeping a few thousand troops in Afghanistan and Iraq indefinitely, so if you find yourself disagreeing with the Taliban not wanting Biden as president, you’re also arguing for more of the same wars Biden’s team promised to end years ago when they were actually in charge.

Biden believes in the practiced method of being the policeman of the world, a position many have argued has only led to more worldwide conflict, more debt, and unnecessary death.

Trump, all his boasting about bombs aside, appears to mostly be arguing, at least in terms of Afghanistan and Iraq, for a more Libertarian approach to the world where the US does not involve itself in matters that do not pose a direct threat.

This doesn’t mean the Taliban will suddenly turn peaceful and embrace different morals or that Afghanistan and Iraq will suddenly be free of terrorism, but it is an acknowledgement that the last 19 years have done little to help those countries and the US, and that perhaps a more diplomatic approach to the world can save lives and encourage change better.

Nobody wants an ‘endorsement’ from the Taliban, but when that endorsement is based on the shared goal of ending a war that has infamously had no real end in sight for years now, then there really is nothing to criticize. By using this new ‘support’ to dunk on Trump and make the case for a former vice president who helped keep conflicts going in Afghanistan and Iraq, critics are just arguing against potential peace, something Democrats used to at least pretend to be the ones fighting for.