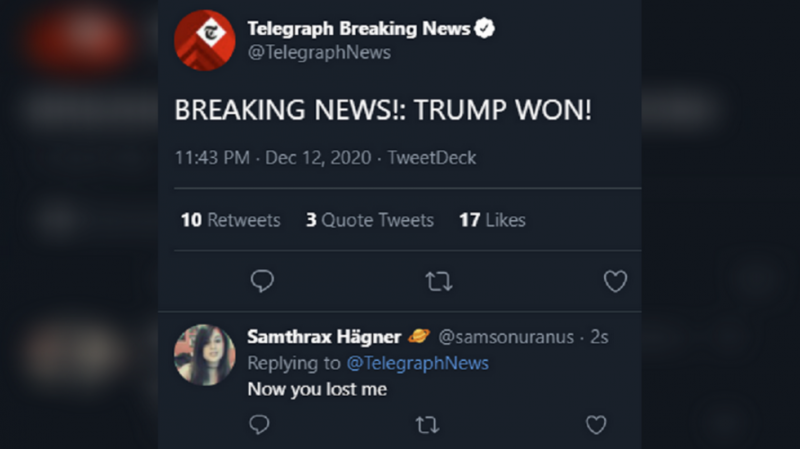 Numerous other tweets were sent out, ranging from plain random to vulgar, that would quickly be deleted but were saved by some users enjoying the frenzy.

Just as the apparently compromised breaking news feed, the paper’s Telegram Football account also appeared to have been hacked.

“Stop deleting my tweets Telegraph,” another message read as the tweets were quickly disappearing.

Another message appeared to be an attempt at a rap.

“Looks like @TelegraphNews is having a bit of a moment,” journalist Tom Harwood, who has a column in the paper, tweeted in reaction to the tweets.

Another message from the presumed hacker announced, “DailyMirror is better anyway.”

“Alright, I’m bored now, I’m gonna stop tweeting, bye now,” yet another tweet said moments later – though it appears its author lied, as more messages appeared in the feed despite frantic attempts of the media and some readers to silence it.

While “breaking news” taglines are often mocked and misused on social media today, it’s unlikely anyone bought into the sudden declaration of Trump as the winner of the presidential election, over a month after most outlets sent out their own “breaking news” tweets declaring the opposite – though Trump maintains he is the true winner.

“Flash alert” breaking news, however, does retain some reverence in older media circles. The Associated Press sent record-breaking seven of flash alerts this year, including the one in which it declared Joe Biden the winner of the presidential election on November 7.