Home / WORLD / ‘Trump will be back in office in August’: MyPillow guy vows to take 2020 election fight to Supreme Court, announces new platform

‘Trump will be back in office in August’: MyPillow guy vows to take 2020 election fight to Supreme Court, announces new platform 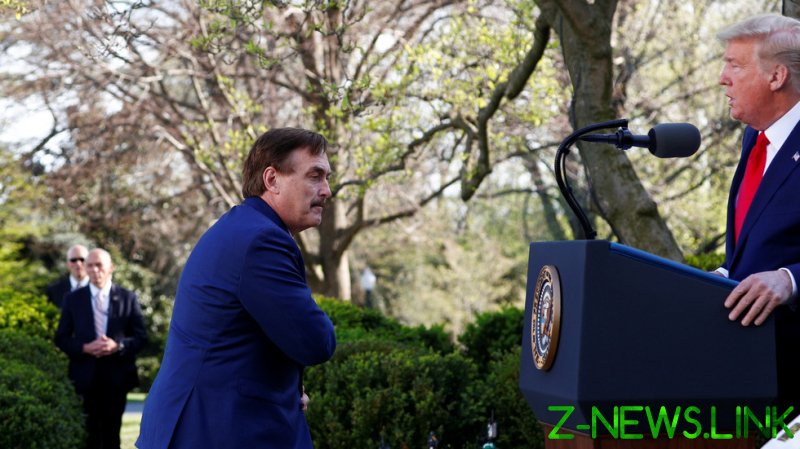 “All the evidence I have, everything is going to go before the Supreme Court,” Lindell told Steve Bannon’s ‘War Room’ podcast, “and the election of 2020 is going bye-bye.”

After some back and forth, Lindell made a bold promise: “Donald Trump will be back in office in August.”

Lindell has remained one of the former president’s most loyal followers, continuing to challenge the results of the 2020 election despite it leading to social media bans. He even released a film, ‘Absolute Proof’, that he claimed proved without a doubt the election was rigged. The film mostly consisted of Lindell interviewing witnesses and ‘experts’ who shared the opinion that the results could be inaccurate. In the movie, Lindell also promised to take his fight and ‘proof’ all the way to the Supreme Court.

Lindell’s election fraud claims have already earned him a $1.3 billion defamation suit from Dominion, a vote-counting tech company he has claimed was somehow hacked by foreign “communist” nations. Lindell has promised to countersue the company multiple times.

“The problem is not that Mike Lindell says crazy, stupid stuff. The problem is that there are violent pro Trump supporters who believe this, egged on by @GOP leaders who lie about the election being stolen. That’s why National Guard troops in body armor are still at our Capitol,” Rep. Ted Lieu (D-California) tweeted with regards to Lindell.

Lindell has also recently been drawing attention by promising a social media platform to combat the political biases and censorship of more mainstream services like Twitter and Facebook.

Called ‘Frank’ at the moment, Lindell claims his site will be able to handle up to one billion users.

Calling it the “safest” and “securest” network, Lindell revealed he was doing things completely independently.

Lindell promised ‘Frank’ will be launching in the coming weeks and also revealed a second documentary on alleged election fraud in the presidential election is on the way from him, this one titled ‘Absolute Interference’.