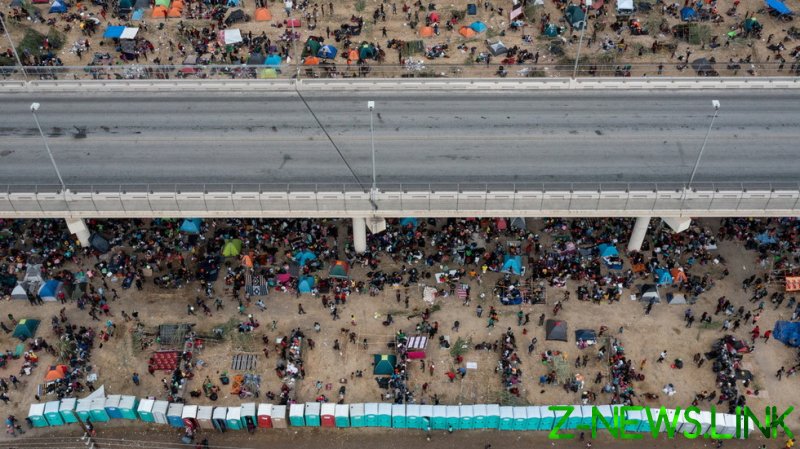 In a Sunday statement, the former president blasted the “mainstream media” for “paying almost no attention” to the situation in Del Rio and predicted the border situation will become “the greatest crisis in the history of our country,” even oddly dubbing it a “crisis crisis.”

Illegal border crossings have surged under President Joe Biden, and reports of overwhelmed migrant facilities and, as well as catch-and-release processing tactics have made the situation a major point of criticism with his opponents.

According to projections released this week, there have been 1.85 million border apprehensions this year, breaking a record of 1.64 million in 2000.

“The largest number of illegal aliens in the history of our Country are pouring in by the millions. They are totally unchecked and unvetted, can do whatever they want, and go wherever they want,” Trump said, adding that “murderers, drug dealers, and criminals of all shapes and sizes” are part of this “massive migration” and, if released into the US, will continue the country’s rapid decline into a “cesspool of humanity.”

Biden has most recently faced scrutiny over images and videos being released from Del Rio, where a bridge has been reportedly used as a temporary holding area for over 14,000 migrants.

The US Department of Homeland Security (DHS) previously vowed to increase evacuation flights in response to outrage, though more than 12,000 remain at the bridge, as of Sunday.

Law enforcement has told media on the ground that while single migrants will be removed, “family units” will be processed and released into the US with an NTA (notice to appear), a strategy many conservative activists have said is dangerous and unproductive.

Evacuation flights, however, are ongoing, according to Del Rio Mayor Bruno Lazano, who is one of numerous Texas officials to place blame for the crisis at the bridge on the president and his administration. The mayor did say on Sunday, however, that after pleading with the administration for help, he was given the chance to brief Secretary of Homeland Security Alejandro Mayorkas on the “dire situation.”