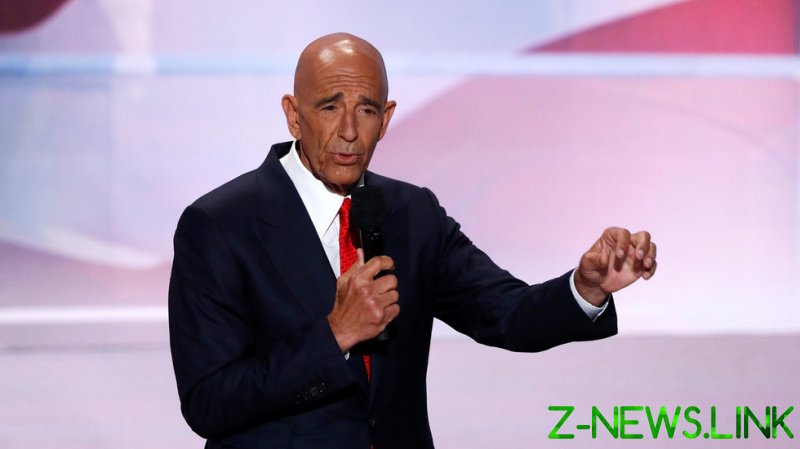 Barrack, 74, is accused of “acting and conspiring to act” as an agent of the UAE between April 2016 and April 2018, as well as obstruction of justice for falsely claiming otherwise in a June 2019 interview with federal authorities, the US Department of Justice said on Tuesday.

Matthew Grimes, 27, of Colorado and Rashid Sultan Rashid Al Malik Al-Shahi, 43, an Emirati national, were indicted as his co-conspirators. The trio “repeatedly capitalized on Barrack’s friendships and access” to Trump, “high-ranking campaign and government officials, and the American media to advance the policy goals of a foreign government without disclosing their true allegiances,” said Acting Assistant Attorney General Mark Lesko of the DOJ’s National Security Division, calling the conduct “nothing short of a betrayal” of those officials, including the president.

Barrack was chairman of Trump’s presidential inaugural committee between November 2016 and January 2017. The Biden administration claims he “informally advised” senior government officials on issues related to US foreign policy in the Middle East, and sought the post of special envoy to the region – which he did not get. He is alleged to have been “regularly and repeatedly” in contact with UAE leadership, whether personally or through Grimes and Al-Shahi, whom he allegedly called a “secret weapon” to advance Emirati policy in Washington.

Trump’s son-in-law Jared Kushner ended up running the administration’s Middle East policy, which culminated in the September 2020 signing of ‘Abraham Accords’ that normalized ties between the UAE, Bahrain and Israel.

Among the activities the DOJ held against Barrack were allegedly inserting pro-UAE language into Trump’s energy policy speech in May 2016; seeking direction for an op-ed published by Barrack in October that year, and asking UAE officials for a ‘wish list’ of policy priorities in December.

In September 2017, Barrack allegedly sought to advise Trump against a Camp David summit to address the dispute between the Gulf Cooperation Council (GCC) countries and Qatar, which ended up not happening. The GCC-Qatar standoff began in June 2017 and ended two weeks before Joe Biden’s inauguration.

Barrack “allegedly made numerous false statements, including falsely denying that [Al-Shahi] had ever requested that he take any actions on behalf of the UAE” during a June 20, 2019 voluntary meeting with the FBI, the DOJ said. Grimes and Barrack have both been arrested, while Al-Shahi remains at large.

The US corporate press – as well as the online Resistance – were quick to put charges against Barrack in the context of their narrative about crime and corruption allegedly endemic in the Trump administration, given all the charges against his aides and even the recent indictment of his company’s chief financial officer.

Others, however, pointed out that the charges – false statements to the FBI and not registering as a foreign agent – amounted to the same kind of process crimes used by special counsel Robert Mueller to go after General Michael Flynn, Roger Stone, and several Trump campaign aides, when his ‘witch hunt’ turned up no ‘collusion’ with Russia.

“How long until they get to everyone who worked in or liked” the Trump administration, former State Department official Amanda Milius, who also directed the documentary ‘The Plot Against The President’, wondered on Twitter.

Others pointed to the hypocrisy of DOJ statements, such as AAG Lesko’s vow that anyone “regardless of their wealth or perceived political power” will be prosecuted for “undisclosed foreign influence,” or the FBI’s “unwavering commitment to rooting out those individuals who think they can manipulate the system to the detriment of the United States and the American people,” given that President Joe Biden’s son Hunter hasn’t been prosecuted for any of his alleged influence-peddling through foreign business deals.